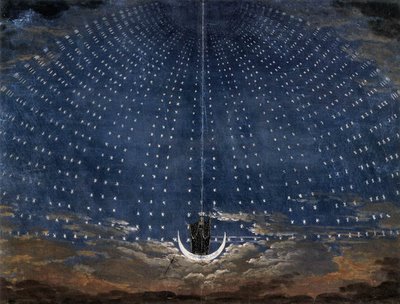 I never really "discovered" Mozart. He just kind of gradually moved into my life, first via my sister, then via school, and then via a movie, and finally by invitation. And now the guy won't go away. But that's fine with me.

My sister is six years older than I am, and she took piano lessons for years in her own youth. Therefore she ended up giving me my first exposure to an awful lot of classical music: the three B's, of course, but also guys like Tchaikovsky and Chopin and Clementi and Mozart. He wasn't my thing at that time (I'm not even sure I actually had a "thing" at that time), but there he was, a little more demonstrative than Bach but a little less stormy than Beethoven. Or so I thought.

When it came time for me to take piano lessons myself, I took on the first movement of that C-Major Sonata after a few years. I didn't do very well with it, since my musical instincts at the age of fifteen were that of an undisciplined slob, but I got through it all right. My piano teacher offered up an interesting quote when I started working on the piece: "Playing Mozart is like taking a musical bath: it cleanses you of bad habits." If only I could have realized what my bad habits even were, but that takes time.

Along about this time Amadeus came out. My mother took me to see it when it came, not so much because it was about Mozart and I needed some culture, but because it was tremendously acclaimed and she really, really, really wanted to see it. This, of course, was in a small town in the Southern Tier of Western New York, and at that time our town had only six movie screens. I remember going to see something else a few months earlier, and my mother asked the manager if Amadeus would be playing our town, and his curt reply of "No". Of course, a bunch of Oscar nominations changed that. Off to Amadeus we went. And I did pretty well, for a young person who hadn't yet caught the bug of classical music but wasn't completely turned off by it, either: I hated the interminable opera sequences, but I enjoyed the story and was moved by poor Mozart's various dilemmas and ultimate fate.

A year or two later, I chose to rent Amadeus from the local video store. (This was when you had to pay to join video stores, and this one didn't bother alphabetizing its shelves.) I don't recall why I wanted to see the film again, but I did, and this time those opera scenes didn't bother me as much. One cinematic joke -- the harping of Stanzi's mother being the inspiration for the Queen of the Night's coloratura fireworks in The Magic Flute -- had completely escaped me at the theater, but now I got it.

That was all well and good, but I didn't really start to grok Mozart until I took up the reading of orchestral scores. I taught myself score-reading with the Symphonie fantastique by Berlioz, but a few months later I found a score of Mozart's Symphony No. 40 in G-minor. Looking at the first page, I was struck by the sparsity of the orchestra (when Berlioz is your orchestral template, even a Mozart symphony looks like chamber music by comparison). Even with my fairly untrained eye, I could tell that there was a contrast going on between a quick, but legato, melodic line and a pulsing staccato accompaniment; and what struck me most of all was the total lack of introduction. With this work, you get one bar and then you're into the melody. I wasn't used to that.

The first opera I saw was one of Mozart's -- The Magic Flute. It was a performance at Artpark in Lewiston, NY. I haven't been to many operas since, but that memory is one of my most enduring.

There's never been a real moment when I suddenly "got" Mozart, no moment of incandescent discovery like that scene in Amadeus when Salieri looks at Mozart's scores and realizes the depth of the man's musical gift. He's just been a presence, always there, always growing.

I've never much liked the cliche about Mozart that he "took dictation from God", because I don't like the idea that Mozart's music sprang from some angelic realm, untainted and pure. Rather, Mozart represents the pinnacle (or a pinnacle) of human musical creation. Mozart reminds me, in times of darkness, that humans can create things that are timeless and worthwhile, things that do not require the endorsement of the angels to be worthy.

Figaro, The Magic Flute, Symphonies 40 and 41, the Sinfonia Concertante for violin and viola, the Requiem, the piano sonatas, the clarinet concerto, the piano concertos...all the work of a human genius. I don't think that we are all capable of creating what Mozart created -- that would be absurd -- but we should all be capable of seeing the greatness in Mozart's creation, and it gives comfort in a cold universe to know that there exists a species capable of producing from its numbers, over hundred and even thousands of years, a Mozart.

I guess that's why I love so much the idea that the Universe is teeming with life and with civilizations, even if many of them are already long dead. I'd hate to think that out of this entire Universe of ours, there's only been one Mozart.
scrawled here by Kelly Sedinger at 6:37 AM