How to Spend a New Year's Day

I like that New Year's Day happened on Sunday this year -- it meant that the football I watched was the football that actually interests me (the college game just doesn't do it for me anymore, especially in this land of inexplicable Notre Dame fans). Instead, I got to see the NFL's final day of action, in which five or six teams scrambled for two or three playoff spots.

Last night, we were in bed before the year turned, but we spent the evening eating fine finger food -- two kinds of shrimp, party-rye bread with two different cheeses, "Little Smokies" and meatballs in barbecue sauce -- and watching The Three Musketeers. It was the version from the 70s, produced by the Salkinds and directed by Richard Lester. I hadn't seen it since I was a teenager, and I'd completely forgotten how entertaining it is. (Since the movie leads directly into the sequel The Four Musketeers, I'll wait until I watch that again before I post actual thoughts about the movie.) We also watched part of Jerry Maguire before finally crashing.

This morning had us in church (hmmmm, a lot fewer people there this week than on Xmas eve), and then home for football and TV. At dark we headed out to the Erie County Fairgrounds for this drive-through lights display thing -- and frankly, this was a colossal disappointment. The road was so rutted and potholed that my car actually scraped the road at points, and everything was in one open swath of land with the driving course just going back and forth over the same territory, so you pretty much saw everything from a distance. Frankly, folks, if you're in upstate NY and you're looking for a drivethrough lights display at Christmas, go to the one in Syracuse. (Assuming it hasn't changed since we left.)

(Oh, and Buffalonians? You know that portly, deep-throated emcee guy at the County Fair? You know the one I mean? Did you ever wonder what he does when the Fair isn't in session? Well, tonight he was an Elf at the Fairgrounds' Christmas thing.)

Tonight we honored our traditional viewing of the New Year's From Vienna concert, and I may just get this one on CD. Mariss Jansons conducted a program that honored Mozart's impending 250th anniversary, in addition to the traditional Strauss family waltz stuff, and he incorporated a ringing cellphone into the "Telephone" Polka. It was nice to see someone new conduct the Vienna concert -- I thought that Lorin Maazel had a stranglehold on the Vienna Philharmonic, so often does he conduct the New Year program.

The centerpiece of our New Year's Day, though, was the dinner I made: 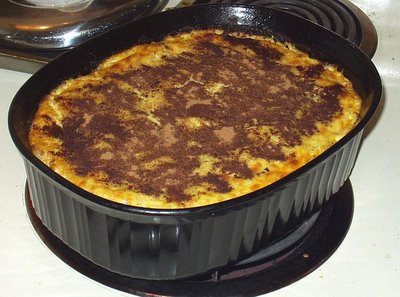 That wonderful item is Pastitsio, which is a Greek forerunner of lasagna. It's the best thing I know how to make, and believe me, I'm not one of those guys who can make two things with one of those being grilled cheese sandwiches. I know my way around a kitchen. I've posted the recipe for Pastitsio before, but here it is again, because I'm nothing if not helpful!

Cook 1.5 cups of elbow macaroni, and drain. Toss with a mixture of 1/3 cup grated parmesan cheese, 1/3 cup milk, and 1 beaten egg. Set aside until ready for assembly of the dish.

Beat one egg; set aside. In a heavy stovetop pan (Dutch oven or something similar), 1 lb ground meat (I usually use beef or pork, but I have used bulk pork sausage before -- if you use a seasoned meat, go easy on the salt later on), 1 onion and a couple tablespoons chopped garlic (to taste, really) until the meat is browned. Add 1 small can tomato sauce, 1/4 cup red wine (whatever's on hand -- I've made this dish using red wine from Cabernet to Port), salt & pepper (1 tsp each), 1 tbs parsley flakes, 1 tbs oregano, and 1 tbs ground cinnamon. (Generally I put in a bit more oregano and cinnamon; these are to taste.) Stir, bring to boil, and then simmer for ten minutes or so, until the meat mixture is quite thick. At that time, remove from heat and slowly stir the beaten egg into the meat mixture. This will thicken it even more.

White Sauce for the Top

Beat two eggs, set aside. In a saucepan, melt 3 tbs butter or margarine; add 3 tbs flour to make a roux. Then add 1 1/2 cups of milk, all at once, and ground pepper to taste. (I use quite a bit.) Stir constantly, breaking up any lumps in the roux, over fairly high heat. You want this to come just about to a boil, because a roux thickens best at a boil. When the mixture is pretty thick, temper the eggs by spooning 1/4 cup or so of the sauce into them; then slowly pour the egg-and-sauce mixture back into the pan with the rest of the sauce, stirring along the way. This will thicken it even more. Then stir in 1/3 cup grated parmesan cheese.

Lightly grease, butter, or spray with cooking spray a 1.5 qt casserole dish. Assemble the layers as follows: 1/2 of the macaroni mixture, then all of the meat mixture, then the remaining macaroni mixture, and finally top with the white sauce. Sprinkle the sauce with more ground cinnamon to taste (I absolutely blanket the thing, because we adore cinnamon) and then bake in a 375 degree oven until the top is nicely browned. Remove from oven and let stand for several minutes before cutting and serving.

Here's what it looks like dished up and ready to devour: 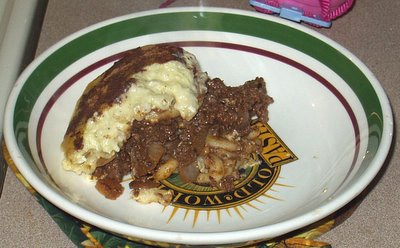 (And the Image of the Week and Sunday Burst of Weirdness will return next week.)