My Books: THE SONG OF FORGOTTEN STARS

(THIS PAGE IS BEING UPDATED! STAY TUNED FOR THE FINAL VERSION!)
(Note to self: Fix size disparities in text below, add links)
Two young Princesses.
One starpilot.
A lost planet.
An ancient and forgotten empire.
Sentient starships!
Six-legged bear-cats!
An adventure spanning the stars!
Thrills!
Romance!
Mystery!
Action!
It's LORD OF THE RINGS meets GUARDIANS OF THE GALAXY!
It's George Lucas meets Hayao Miyazaki!
It's James Gunn meets Winnie Holzman!
It's THE SONG OF FORGOTTEN STARS!
Book One: STARDANCER
Book Two: THE WISDOMFOLD PATH
Book Three: AMONGST THE STARS
Book Four: THE SAVIOR WORLDS
STARDANCER 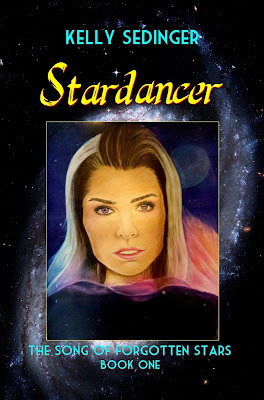 All her life, sixteen-year-old Tariana Osono, Princess of the planet Gavinar, has dreamed of flying to the stars. But when a disaster cripples her ship on her very first voyage, Tariana can only save herself and her ten-year-old sister, Margeth, by calling upon powers she never knew she had. In random desperation, Tariana flings their tiny escape ship thousands of light-years across the Galaxy, to a remote and unknown planet called Xonareth.

To some on Xonareth, the two Princesses are saviors, come to free the planet from a punishment handed down by an ancient star empire, fallen and forgotten for ten thousand years. To others, however, these visitors from the stars are the greatest threat Xonareth has ever faced.

As both sides muster for war, Tariana and Margeth search for a way home, even as Tariana learns the truth about her new powers: she is a Stardancer, and only a Stardancer can take Xonareth back to the sky. 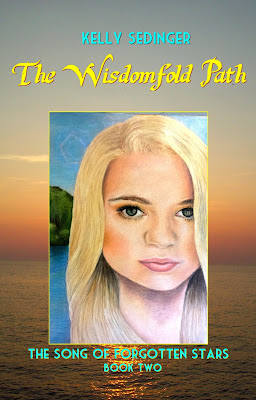 Turning seventeen should be a happy occasion, but for Princess Tariana Osono, it is anything but. Even though her arrival on the mysterious planet Xonareth — along with her younger sister, Margeth, and their enigmatic ship’s navigator, Lt. Rasharri — has freed that world from a ten-thousand year exile from the stars, they have still not found a way home, thousands of light-years across the galaxy.

Meanwhile, Xonareth’s last two remaining cities face a new danger. As they struggle to restore the quickly-dying Cintronia crystals that are their only source of power, a shadowy movement emerges, dedicated to severing Xonareth’s last ties to the long-fallen Arrilori Star Empire that imposed their exile so long ago. Let by a mysterious woman known only as Yarreen, this movement will drive wedges into families, set brother against brother, and test Tariana’s newfound powers and legacy as a Stardancer like never before. And when the darkest moments come, the key to Xonareth’s future may lie not in Tariana, but in Margeth, whose own path to an uncertain destiny is just beginning to unfold.

Continuing the story begun in STARDANCER, THE WISDOMFOLD PATH is a tale of sisters and brothers, of secrets and history, of lies and truths, of loss and love, of despair and hope…and of a ten-year-old girl rising above herself in ways she never expected.

PB
kindle
AMONGST THE STARS 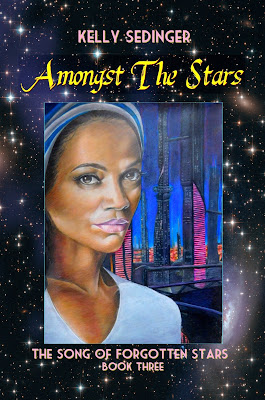 Penda Rasharri has heard the call of the stars ever since she first gazed upon the night sky. She hears them still, even after her home world’s tragic destruction and her search in a thousand different skies for a place to call her own. Even now, after being stranded for two years on the planet Xonareth with her young companions, Princesses Tariana and Margeth Osono of Gavinar Five, the stars still call to her.

Now, as the Xonarethi rebuild their cities and look themselves to the stars, Penda and the Princesses wonder if it’s time to renew their search for a way home. But partisans of Xonareth’s former King are driving the planet toward civil war, and unbeknownst to all, a mysterious spaceship — only the second in ten thousand years — is approaching the planet.

Continuing the tale begun in STARDANCER and THE WISDOMFOLD PATH, AMONGST THE STARS is a story of belonging and finding one’s way, of the promise of the future and the persistence of the past, of homecomings and departures…and of one starpilot’s search for the place she truly belongs. 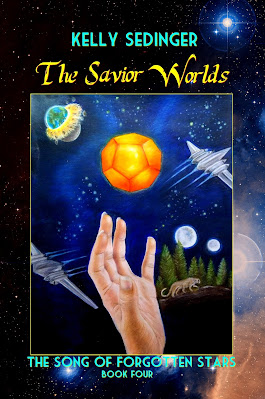 Freed from their ten-thousand year exile, the people of Xonareth, a remote outpost world of the once-mighty but now-forgotten Arrilori Star Empire, are finally returning to the stars. But strange things begin happening as ancient plans of the Arrilori start to unfold.
Princesses Tariana and Margeth Osono, stranded for over two years on Xonareth, are led down hazardous paths that take them away from Xonareth entirely. As danger mounts around them, their only hope is that their star pilot, Lt. Penda Rasharri, can find them in time.
Meanwhile, on the other side of the galaxy, a new trail is uncovered by those who are searching for two missing princess, a trail which shadowy powers intend to keep secret and closed.
Ancient mysteries arise, new alliances are forged, and the legacies of ten thousand years of history make themselves known in THE SAVIOR WORLDS, Book Four of THE SONG OF FORGOTTEN STARS.