I figured that, apropos of some discussion that happened at the Buffalo BloggerCon the other night, I should establish a bit of Star Wars geek street cred. So, I figured I'd do a little research online to see if anyone ever came up with a recipe for rootleaf (the stew that Yoda makes over an open flame on Dagobah in The Empire Strikes Back). And sure enough, I found a number of recipes!

This one actually looks tasty, but it also strikes me as being a tad unlikely, because it includes meat. I'm not claiming that Yoda was a vegetarian, but I rather doubt that meat was easy to come by on Dagobah. It seems to me that Yoda would have subsisted on root vegetables and the like. Maybe stewed eel meat, or roasted lizard, bat, or amphibian-on-a-stick.

Here's a vegetarian version (but not strictly vegan) that strains credulity because of the presence of dairy items. I don't recall seeing a cow milling about outside Yoda's little cottage.

But anyway, I'm not sure I'd recommend rootleaf stew anyway, even if one could get an authentic recipe. I mean, Yoda reaches the tender old age of 880 or something like that while living on Coruscant and eating the food there, and he regularly fights Sith Lords and conducts a Clone War and generally guards peace and justice in the Old Republic...and then he goes to Dagobah, where after just twenty years of living in hiding on a rootleaf diet, he dies!

(Oh, and as a bonus item, wouldn't this make the coolest centerpiece for a drinking party ever?! 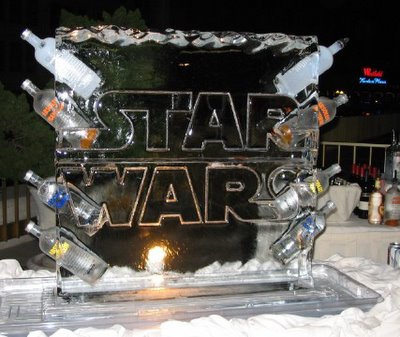