So this is weird. I didn't forget yesterday. I drew a blank.

Remember, I'm getting each week's selection via a music challenge that is the kind of thing you find on Twitter occasionally. So far so good for the first few weeks, but now we're up to Number Four, which is:


A Song that Reminds You
of Someone You'd Rather Forget.
See, I got nothin'. I can literally think of no one in my life (or who was ever in my life) that I'd like to simply forget. I thought about going political (that "Money Money Money" song they used as the theme for The Apprentice, before that show's host made a disastrous career change), but I wasn't in the mood for that. So, for lack of anything else, here's "Part of Your World" from The Little Mermaid. Why? Well...this friggin' movie was the featured event in two different dates I went on when I was in college, and in both instances, those dates were followed the next day by the "It's not you, it's me" speech. So...yeah. (I did eventually watch the movie with The Girlfriend, but only after we'd been dating for a year and I could be reasonably confident that its jinx effect had worn off. Which it had...either that, or it's just taking decades to work, but I really hope not.)

So yeah. "Part of Your World". Whatevs, Ariel. Harumph!


(Oh, and obviously I feel no particular animus toward either of those young women from back in the day. One's even a friend on Facebook! I've no idea whatever became of the other one, other than that I think she's a school teacher in Iowa someplace.)

scrawled here by Kelly Sedinger at 6:28 AM No comments: 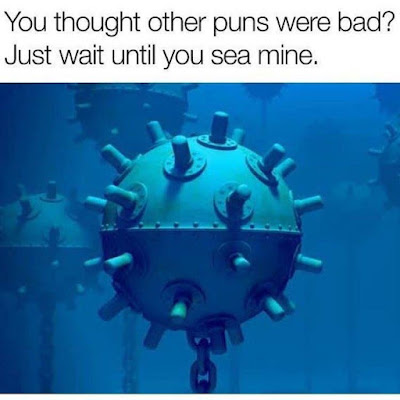 My next book, a supernatural thriller called The Chilling Killing Wind, is nearing release, and to that purpose you can read the Prologue over on my official site! Check it out!

Next week I'll reveal the cover!

Transcriptions of works from one medium to another can be especially fascinating, as this orchestral version of Franz Liszt's Hungarian Rhapsody #2 demonstrates. This was originally a work for piano, and to perform it well requires enormous skill from the pianist. The work's transcription to orchestra makes it into a showpiece as well.

scrawled here by Kelly Sedinger at 6:24 PM No comments:

The faces of accomplishment

Here's what people look like when they've just landed a spaceship on Mars. 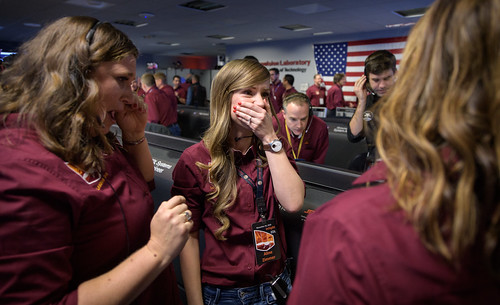 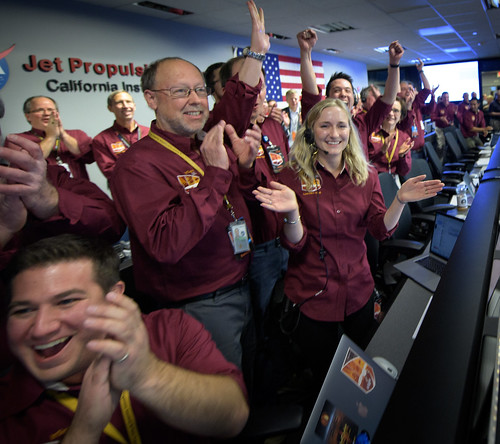 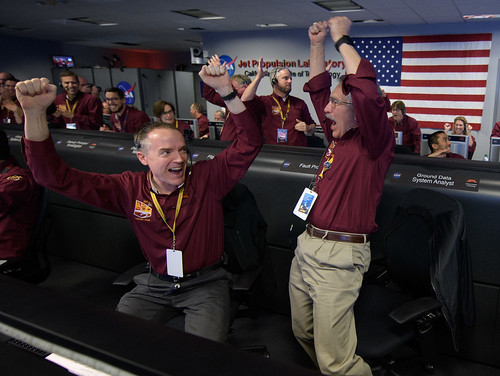 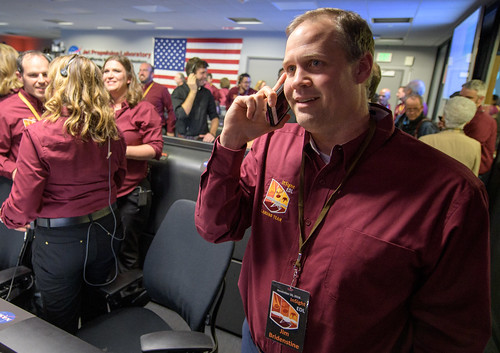 This is a hell of a thing. Well done, NASA!

Email ThisBlogThis!Share to TwitterShare to FacebookShare to Pinterest
Labels: Events of the Day, Science 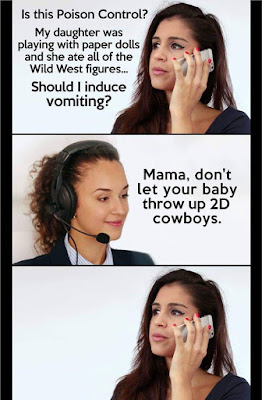 It's the third installment of our music challenge! This one is apropos, given that today is the coldest day in Buffalo Niagara since February. Our high today is to top out at 21 degrees, and when we roused ourselves from our warm bed (such rousing coming via two dee-oh-gees who had to pee) was a nicely balmy 7 degrees. Today's category, then, is "A Song that Makes Me Think of Summer". Well, the very first song that leaped to mind is this oh-so-Seventies tune by Mungo Jerry. Enjoy! Summer is only mumble-mumble months away!

scrawled here by Kelly Sedinger at 10:34 AM No comments:

So we're nearing the last phase of 2018, and today is Thanksgiving. Today will be a day of food and drink and rest and, I canna lie, feeling wistful that we're not in New York City for the day. Here, as always, is my ongoing list of things for which I am thankful this time around.

Carla, the new dee-oh-gee
Cane, the not-as-new dee-oh-gee
Lester and Julio, the really-not-new cats
Rum
Bourbon
Scotch
Gin
Sparkling wine
Hard cider
Paula's Donuts
Ithaca, NY
Autumn Leaves Books
The Rochester Lilac Festival
Knowing where a bunch of gluten-free restaurants are between here and the Finger Lakes
The Finger Lakes
Letchworth State Park
Taughannock Falls
The Ontario County Antique Mall
Finger Lakes wineries
Fountain pens
Fountain pen ink
Making waffles
Popcorn with butter
Kettlecorn
Corn dogs
Chiavetta's chicken barbecue
The Erie County Fair
Hot dogs at Taffy's
Hot dogs at Ted's
Hot dogs at home, on the grill
Star Wars
Casablanca
Hayao Miyazaki and the rest of Studio Ghibli
The Scarlet Pimpernel
88 Cups of Tea (podcast)
Functional Nerds (podcast)
Sword and Laser (podcast)
Writing for The Geekiverse
Our backyard firepit
All my various methods of making coffee (pourover, French press, Moka pot)
Mississippi Roast
The Instant Pot (which I still don't even use as much as I should)
Art and craft shows where I can buy gifts right from the person that made them
Picking out jewelry for The Wife
The Great Lakes region
Pittsburgh, PA (honorary Great Lakes city in my heart)
New York City
The two friends of mine who are finding a lot of new purpose in their lives of late
Chestnut Ridge Park
Sprague Brook Park
Emery Park
Canalside and the Outer Harbor
Knox Farm State Park
The Mill Road Overlook in East Aurora
Roads: US 20A, NY 240, NY 39, Girdle Road, Two Rod Road
Fried chicken
Chicken and waffles
Hot sauce
John Oliver and Last Week Tonight
The Blue Wave
The Resistance
Hector Berlioz
Sergei Rachmaninov
Alexander Borodin
JS Bach
Ludwig von Beethoven
John Williams
Jerry Goldsmith
Max Steiner
Erich Wolfgang Korngold
Howard Shore
James Horner
All the new authors on my shelf whose works I an thrilled to read
The ongoing emergence of so many authors of color and the opportunity to read them and learn from their experiences and perspectives
Goodreads
Twitter (the parts without Nazis)
Harry Potter
Star Wars
Star Trek
The Last Jedi
My Fair Lady
The Chilling Killing Wind
The Song of Forgotten Stars
Princesses Tariana and Margeth Osono
Lieutenant Penda Rasharri
The characters you haven't met yet
The characters I haven't met yet
The days when the writing is easy
The days when the writing is hard
Pies on the table
Pies in my face
Well-worn bib overalls
Stiff raw-denim bib overalls
Vintage bib overalls
The Daughter
The Wife
The world
Our universe

scrawled here by Kelly Sedinger at 10:26 AM No comments:

Some Berlioz this week, and one of his most frequently performed works: the Roman Carnival overture, which is a concert piece comprised of repurposed material from his opera Benvenuto Cellini. Berlioz is not generally considered one of classical music's finest melodists--his themes tend to be long and require a bit of unpacking to find their emotional center--but the melody of the slow section of this piece, first played by the English horn, is one of the most beautiful creations of Berlioz's life. The following carnival dance bursts with energy.

scrawled here by Kelly Sedinger at 3:31 PM No comments:

I have a new post up on the Official Site! It's not long, but it's an update on some stuff I've been working on of late. Check it out! 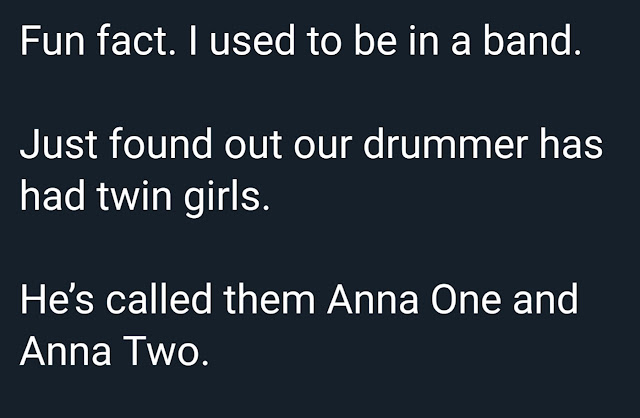 It's Week Two of the challenge-thing I launched last week! This time we need a song with a number in the title, so here's one!

scrawled here by Kelly Sedinger at 3:07 PM No comments:

OK, I'm going to try something new! Here's a 30-Day Challenge of the type that often shows up on various social media thingies. The idea is quite simple: Each day you post according to that prompt.
Well, I'm going to use this not as a daily prompt, but a weekly one. Each Thursday for the next thirty Thursdays I'll use the next prompt to select that week's song or music choice. By my calculations, assuming I don't miss any Thursdays, this will wrap up on the last Thursday in May, bringing us more than halfway around the calendar. Cool, huh?
No?
Well, I'm doing it anyway. 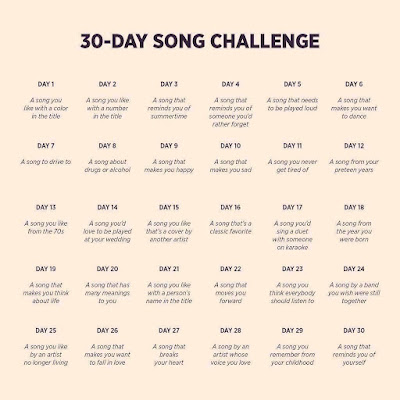 Day 1:
A song with a color in the title.
(It specifies "a song I like," but I'll just take that as a given.)
Here are the Lemon Pipers, with "Green Tambourine".
scrawled here by Kelly Sedinger at 6:58 PM 2 comments:

In hopes that tonight begins a rekindling of the possibility of America.

scrawled here by Kelly Sedinger at 3:01 PM No comments:

I hate when that happens. 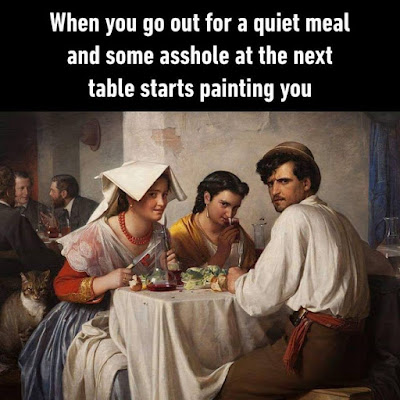 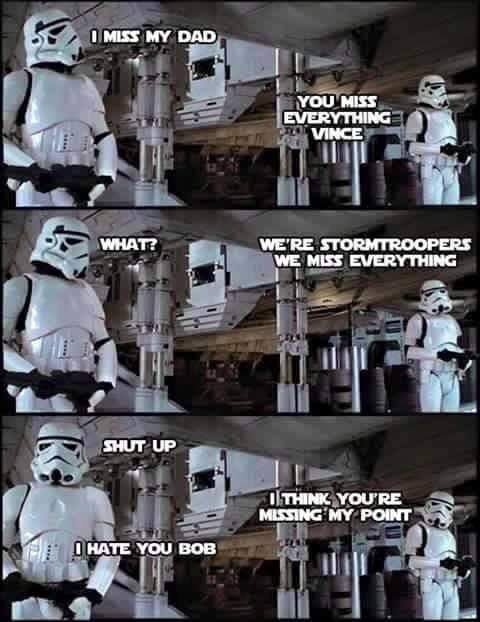 scrawled here by Kelly Sedinger at 2:28 PM No comments: