Nobody goes there anymore: it's too crowded!

According to Craig, one of our local talk-radio stations this morning was raising the red-flag that the new large projects either in motion or gearing up in downtown Buffalo will create....

Well, shit. If there's gonna be thousands of extra people milling about down there, getting in the way of stuff, than let's call the whole thing off! I'd rather keep downtown Buffalo the way it is, where there are never any crowds to get in my way when I go down there to...umm...er...oh yeah, I never go downtown. And neither does anyone else, unless they work or live there. Hmmmm. That's quite the pickle. What to do, what to do....

I mean, look. Here's a capture from a downtown Buffalo webcam, taken shortly after 5:00 p.m. today. This is rush hour in downtown Buffalo, folks. Notice anything missing? Say, any evidence of people at all, aside from the cars on the Niagara Thruway off in the distance? 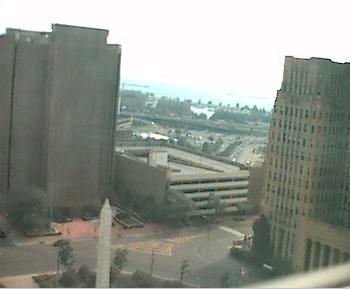 And no, this isn't some obscure corner of downtown where nobody goes. That's Niagara Square, which is flanked by all manner of government buildings (including City Hall), and it's also the center of Buffalo's radial street pattern. No traffic in Niagara Square, at rush hour on a Monday. Yup. That's certainly a status quo worth maintaining.
scrawled here by Kelly Sedinger at 5:19 PM