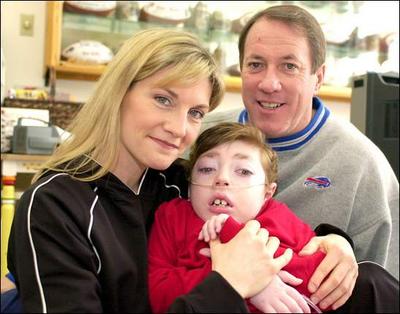 Hunter was diagnosed shortly after his birth with a very rare nervous system malady called Krabbe's Disease. The original prognosis was that Hunter would not live past his third birthday, but he survived to the age of eight before succumbing to respiratory failure. He lived to be with his father when Jim Kelly was inducted into both the Pro Football Hall of Fame and to the Bills' Wall of Fame.

Shortly after revealing the nature of his son's health problems, Jim and Jill Kelly formed a charity called Hunter's Hope, whose purpose is funding the continued research into cures for diseases like Krabbe's.

As the father of a child with profound health problems, I found the news of Hunter's death particularly painful. It's almost trite to note that parents aren't supposed to outlive their children, but even worse is to know just days, weeks or months into your child's life that you are almost certainly going to outlive them. Even as Jim and Jill Kelly battled for Hunter's life, and even as they saw him live day after day past the time when the original doctors thought he would be gone, they had to know that one day the battle would end as all such battles inevitably do.

Jim Kelly was a fighter on the football field and he's been a fighter off it. So too was his son. How sad that Hunter's one fight had a predetermined outcome.

"Every battle is won before it's ever fought," wrote Sun Tzu.

It isn't just about war.

UPDATE: The news of Hunter Kelly's death is, of course, all over the local news. Here is the Buffalo News article, which includes a sidebar with the official statement from the Kelly family. (As is the norm for the News's often-inept website, they present the Kelly statement as a .jpg image, and it's really hard to read at my monitor resolution. I'll keep looking for a linkable text of the statement.) Here, also, is the the official statement from the Buffalo Bills.

It may seem, to some, that the Buffalo area puts a little more stock in Jim Kelly than is really warranted for a football player. Maybe so, maybe not -- but Jim Kelly is generally beloved here as much as, say, Brett Favre is beloved in northern Wisconsin. For me, the glorious run of four straight Super Bowl appearances by the Bills coincided with my college years, and even though they lost each one of those games, watching the heroics of Jim Kelly and Thurman Thomas and Bruce Smith and all the rest of them was for me a real connection to my home, 800 miles away. For four years, Jim Kelly was Buffalo to me. And in a way, he still is.
scrawled here by Kelly Sedinger at 4:58 PM