I didn't take as many photos during our day at the Erie County Fair yesterday as I thought, but here are a few good ones. 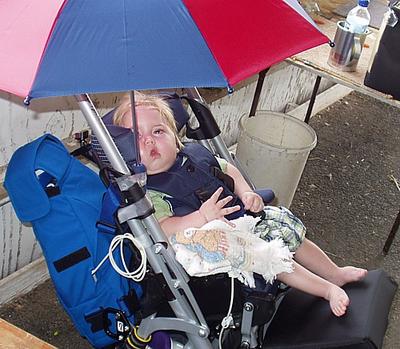 That blue pack hanging from the back of the stroller contains the pump. It pretty much does the work of the manual feedings I described a while back; you can see some of the tubing coiled up there at his side. If I recall correctly, he was in mid-feeding in this photo. With the pump, we could push him around and feed him at the same time. The downside was that the ambient noise of the Fair made it nearly impossible to hear the pump's beeping when it was done. (I'll post more detailed photos of the pump set-up sometime in the next week or two.)

We were at the Fair all day, from shortly after 11:00 a.m. until nearly 9:00 p.m. We saw farm animals; watched the Zoppe Family Circus (but Nino the Clown was not in attendance, which really hurt the production, in our view -- I'm not a clown lover by any means, but this guy is just great) and the Stars of the Peking Acrobats (these folks are freaking amazing); we drank lots of Birch Beer and Root Beer (but no real beer, alas); we shopped at those little booths and tents where fun stuff is sold that's just a little more fun to buy at a County Fair. Oh, and we ate: corn dogs, Chiavetta's chicken barbecue (a Buffalo thing), ribbon-cut fries, waffle cones, cotton candy, roasted almonds in different flavorings, ice cream, and so on. We're going back next Saturday, as well.

(Side rant: at an event like the County Fair, there is pretty much a constant flow of people in the main thoroughfares. So, people who just stop in the middle of high-traffic areas, who are annoying to begin with, are downright infuriating to those of us pushing strollers about. And even worse are the people who, upon entering one of the large buildings housing commercial exhibits, get about ten feet past the door and then stop dead in their tracks while they look around at the pretty lights. If you're one of these people, please be aware: you're not hallucinating the decreasing politeness in my tone as I say "Excuse me" three or four times, with increasing loudness.)

The Daughter, as expected, had a terrific time. She got to hold a bunny: 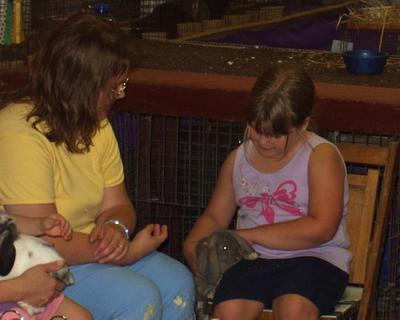 And she got to ride an oliphaunt elephant: 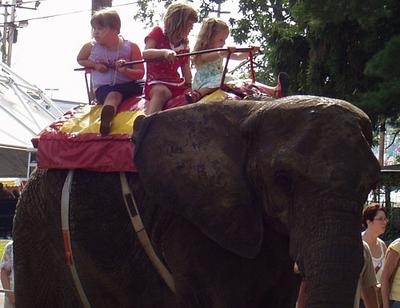 And yes, there were rides. I love walking the Midway after dusk, and there are lots of rides I'd love to do if I wasn't playing the part of the Dad walking the stroller. (This Saturday, the "must" on the schedule for me is riding the Ferris Wheel. I adore Ferris Wheels.) The Daughter and the Wife rode the bumper cars: 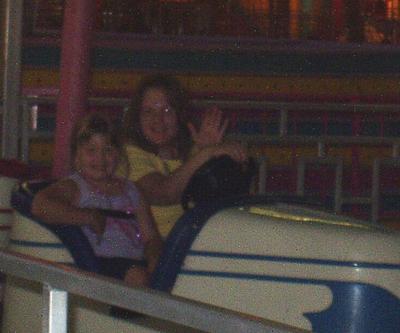 Finally, the Wife and I had to laugh at this warning noticed posted outside the Bumper Cars. It made us wonder just what kind of Bumper Cars they've got down to the Fair these days.

Bumper cars in the air? Shit, how many tickets does that ride take?

I also had to laugh at the Scientology tent, although I was a little depressed at how many people were in there. I hope they don't get too many recruits out of the deal. When we walked by, a kid in a Scientology t-shirt who was no more than eleven years old asked us if we wanted our free stress test. Of course, we demurred, and I made a point to make a couple of loud comments about Tom Cruise not being that great an advertisement for Scientology these days. Next week I'm considering walking by and singing, in my best Homer Simpson voice, "Nananananananananananananana, LEADER!"

We also walked by a tent in a fairly low-traffic part of the Fair, back behind some of the buildings and behind the Midway, where there was one large tent with a number of tables within that exhibited no activity at all at the time we walked by. We could only make out what two of the tables in that tent were: one was for AA, and the other was for the United States Postal Service. I draw no conclusions from both those tables being in the same place.

Finally, we were at one point looking for a bathroom, and we ended up walking into the slot machine facility at the Fairgrounds. That place is freaking creepy: no windows at all, loud and colorful slot machines everywhere, and armed security guys standing at each entrance with their patented glower in place. I will never understand what makes casino gambling so damn popular in this country; I hate that atmosphere.
scrawled here by Kelly Sedinger at 6:28 PM