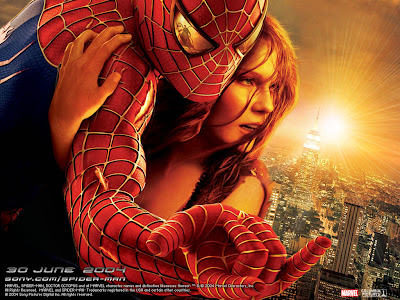 (Before I begin, I have nothing really to add to my original posts on the first and third films.)

OK, Spiderman 2. This is, simply, one of the best superhero movies I've ever seen. It's almost right up there with Superman. It's good because, like the best superhero movies, it inherently gets what its hero is all about. Now, that wasn't a problem with Spiderman, but where the first film seemed a bit hesitant to allow its hero to really get anywhere, Spiderman 2 had no such problems.

The key to understanding Spiderman, as is the case with all great superheroes, is understanding his regular life alter-ego, Peter Parker. Superhero alter-egos often tended to be people with good and productive lives as civilians in addition to their superhero antics; the central brilliance of Spiderman has always been that about the only part of Peter Parker's life that is not a slowly unfolding train wreck is his life as Spiderman, and even then we're not always sure. Peter's a guy with problems. He's brilliant and motivated, but somehow he can't put those two things together into a life that doesn't involve constantly scraping the bottom of the money barrel, desperately clutching on to – and failing to keep – a job as a pizza delivery guy, failing to keep simple promises like "Sure, Mary Jane, I'll be there at eight." Peter Parker's life is a total, complete mess, and it's the kind of mess we can easily relate to – well, aside from the spider-powers and being hunted by deranged supervillains stuff.

Spiderman 2 gets all of this. Take its wonderful opening sequence, which has Peter trying to keep the afore-mentioned pizza delivery job. He has to go some clearly absurd distance in some clearly absurd amount of time – something like fifty New York City blocks in twenty minutes with eight pizzas – and he's on his last chance. Off he goes on his motor scooter, and he's doing pretty well for a while, until something happens that makes the scooter trip impossible. What's a guy to do? Why, have Spiderman deliver the pizzas! Of course Peter can traverse the remaining distance in mere minutes, right?

Well...wrong. Even as he web-slings his way across town in minutes, he fails to make the delivery guarantee, the receptionist rolls her eyes and says "I'm not paying for those," and Peter gets fired. Ouch. And of course, as everyone well-versed in the comics remembers, Peter is brilliant and yet has a hard time in school; he's ambitious and yet can only find semi-reliable money in selling photos of himself as Spiderman to the Daily Bugle; he somehow can't manage to get any kind of relationship going with a girl; his best friend has sworn to kill Spiderman; and to top all of that off, Peter makes the acquaintance of another in what will be a long line of brilliant scientist-types who miscalculate in an experiment that goes so awry as to turn them into supervillains. This time, it's Otto Octavius, whose brain ends up fused with the mechanical arms he's invented for himself, thus making himself into...Dr. Octopus!

One of the film's masterstrokes is in how it creates its villain. Whereas in the first film Norman Osborne was something of a loon even before he went all the way around the bend as the Green Goblin, in the second film, Octavius is depicted as not just brilliant, but also warm and very likable. His fall into horrible villainy is a tragic one, even as we can somehow understand his motives after he becomes Dr. Octopus. The first two Spiderman movies really handled their villains well, which is a huge reason as to why they both worked.

So why did I like Spiderman 2 more than the first one? As I noted years ago, Spiderman bothered me not so much in the shortcuts in took in the Spiderman story but in the way it took them. Spiderman 2 commits no such errors along the way. Yes, we're in movies, so we can't have everything we'd want in a Spiderman movie, but the film gets all of its little touches right, along the way.

The most important detail to get right in a good Spiderman story is that things never go quite Spiderman's way. Ever. Things go wrong for Peter Parker most of the time, and on the infrequent occasions when they actually go right, they do so in such a way that not only does it look to everyone else that Peter's screwed up again, but he can't even set the record straight without revealing himself as Spiderman. So we have Peter ending up late to Mary Jane's big acting debut because he had to stop and save some random pedestrian from getting run over by a car along the way. Or, in one of the best tiny moments in the film, in the pizza delivery scene early on, Peter realizes he's not going to make it. So he ducks into an alley and pops out seconds later as Spiderman, with the pizzas! Yay! Except some random passerby saw him go into the alley and saw Spiderman exit, so he yells out, "Hey! Spiderman stole that guy's pizzas!" A throwaway moment that illustrates the fact that Peter can never get the credit for anything.

Spiderman 2 also works because it doesn't commit the somewhat vexing errors with regard to Spiderman canon that the first and third films commit, primarily with respect to Gwen Stacy. Basically, there was almost nothing in Spiderman 2 to distract me from the business at hand. (Well, maybe one thing – the scene where Spidey literally unmasks himself in front of an entire crowd of people. That strained things a bit for me, but I could forgive it.)

Spiderman 3 would go on to commit a pretty impressive number of errors, even though I've never been as down on it as most people seemingly are. Nor have I ever been as down on Kirsten Dunst as many people seem to be, either. So basically, I wish the original creative team could come back and continue the work they started.

(BTW, in watching the three Spiderman movies again, I was more favorably impressed with Danny Elfman's scores with the first two films than I was originally. They're actually fairly subtle scores, but not as themeless as I had first thought. They're still not favorite scores of mine, but they're not bad.)
scrawled here by Kelly Sedinger at 10:08 PM

I love this movie. I love your review of this movie, except for one little, teeny, tiny thing; it's Spider-Man. Sorry, it's the former comic book geek in me.

I have such fond memories of seeing part one and part two. In the first one I went alone on opening day because everyone baled on me. Then they sold out while I was only a few people from the ticket box. As I turned and grumbled the manager gathered a few of us and gave us free passes for the next show. I sat in the car and waited two hours then sat beside this 15 year old kid and his date who was clearly out of his league. But I made him look like such a funny kid that she fell in love with him I just know it. I was a great wingman. While waiting for the show to begin people began yelling out "I AM SPIDER-MAN" like in 'Spartacus' until one kid who must have been 400 lbs got up and in the loudest voice proclaimed "I AM SPIDER-MAN" and ran down the aisle. It was like watching the Juggernaut. Nothing was going to stop his forward momentum. Just as he reached the bottom of the aisle he jumped up and SPLAT on the wall. Everyone thought he died and gasped accordingly. Then he got up to the hugest ovation ever. It was also one of the rare movies I was at where everyone stood up and cheered at the end when Peter asked "Who am I?" Everyone yelled. "I AM SPIDER-MAN". I cried at the second one when Aunt May gave her speech about 'heroes' and what they do for us. Sorry about the insanely long comment but this topic requires me to leave such a missive each time I see someone talk about those movies.