What's wrong with this kid?

A kid gets lost at a comics convention and decides to ask for help from the obviously most likely source for it: a couple of superheroes. 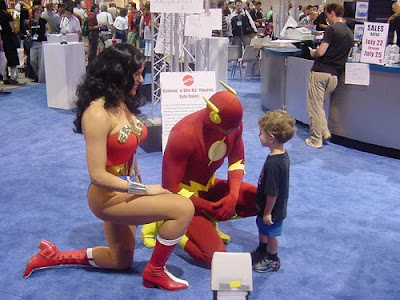 Give him a couple of years, of course, and he's not looking at the Flash. He's looking at...a couple of other things there, just to the Flash's right.

(But I wonder if that woman has any acting chops? She looks perfect as Wonder Woman! Cast her now, and write the script later!)

You mean WW's boots? Yes, that is a very nice pair of boots. Shiny.

WV: snoid. A character from some R. Crumb cartoon, I do believe.