I've waxed poetic about the library in my town a bit over the years. Truth to tell, one of my favorite places in any town is the library, and whenever I've moved, finding the local library has always been something I do very early on. So the Orchard Park Library has been a major part of my life -- our lives, I should say -- for all of the seven years we've lived here.

That photo, above, is the view I had a couple of weeks ago when I packed up the laptop and went to the library for an afternoon of writing and whatnot. I hadn't planned to take the photo, actually, but I did when I realized that I'd never seen the library from that vantage point before. Because the library doesn't have a ton of seating places that are in close proximity to power outlets, I had to sit way over on the far wall, by the fire exit. That's over in the Children's section, actually, which is another reason why I don't spend much time over there. (The Daughter does, but I don't.) Anyway, the vantage point struck me, the way the carpet pattern seems to mirror the grid of the new drop ceiling. (Our library was remodeled a year ago.)

After I left, when the library closed for the day, I decided to spend a few minutes exploring a place that I've often noticed but never really investigated. The library building is directly adjacent the old Orchard Park railroad station, which was pretty rundown when we moved here but has since received a lot of volunteer-based restoration work.

Behind me there is the library itself (and farther behind that, if I weren't in the way, is my church). If I'd had more foresight that day, maybe I'd have worn the more railroad-appropriate hickory-striped overalls over there, but we can't have everything, right? To the station itself:

Walking around the corner there, I found myself standing on the boarding platform, looking southeast:

And, of course, the trains running the other way would go toward Buffalo, because all roads lead to Buffalo:

Here's the front of the station:

The station has a second, smaller building, which is now the permanent home of an old passenger car and a box car. I assume this was a freight depot:

I love the way the light is, on a late wintry afternoon when it's snowing so that the air looks like it has bits of starlight in it:

By this point I was cold enough, and decided to go warm up with some soup at Panera Bread. But I kept thinking about the old trains that ran through here, so when I got home, to see where the trains ran, so I pulled up Google Maps. The first view is here, but here's a grab: 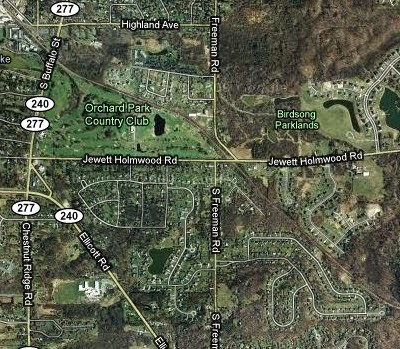 It's a bit hard to see from this resolution, but I wanted to give a hint of a few miles of train route here. On the screen grab, find South Buffalo St; the library and train station are located just up and left of the 'St.' label. You can see the train route very clearly, then, tacking off to the southeast, forming, for a short time, the northern boundary of the Orchard Park Country Club.

Tracing the train route from there, using Google Maps's satellite view, turned out to be a pretty interesting exercise, as the rail route is clearly not in use today. This means that as the route heads into the rural country south and east of the Buffalo-Niagara region, the rail route shows up as a line tracing thinly through forests and at the border of farm fields and so on. At times it seems to disappear altogether, such as where it comes into the small town of Colden. More than a few times I found that I was no longer following a train route and had instead found a stream or some other land feature, and had to double back.

The trick became obvious, once I thought of it: trains can't turn sharply, so train routes tend to make their curves very widely. This means that when the train route seems to vanish, all one really has to do to find it again is look in a straight line from where it disappeared. Then, finding a faint feature that might be the straight line of an old railroad right-of-way, all you do is follow that feature until you confirm it. Here's a good spot: note how the automobile road, Route 24, sticks close to the stream there, forming almost a right angle, while our railroad route makes the hypotenuse through the sudden forest there!

The train line stays easy to follow, for the most part, through much of the countryside. I love the way it looks in this spot, a few miles north of Springville, a town at the very southern edge of Erie County, where the Southern Tier begins (if you're heading south, that is; coming north, Springville is where the Southern Tier ends and Buffalo-Niagara begins). The route is marked by a double line of trees on each side of the rail line. Were those trees planted along the line like that? Or was that just natural tree-growth by virtue of farmers obeying limits on their fields bounded by the trains?

Exiting Springville, I lost the line again, because the terrain down there is hillier and because there are more distractions like roads and rights-of-way for power lines. I almost assumed the train there ended at Springville, but that just seemed odd to me -- surely a southbound train wouldn't stop there, for no apparent reason, and sure enough, it didn't. Part of my error was again assuming the trains would have run somewhat along the route traced by US Route 219, which it actually doesn't; a mile or two south of Springville, 219 jigs west a bit while our train route turns east, and crosses the Cattaraugus Creek gorge on a trestle that I never knew was there, even though I've driven Route 219 through that area more times than the best hypnotist could get me to remember: 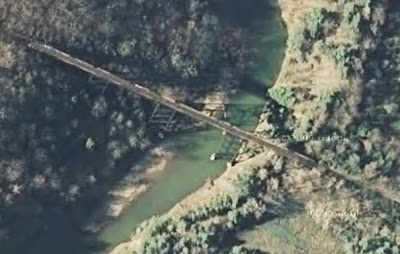 I've always tended to assume that when the automobile arose, the roads tended to follow train routes pretty closely; I'd never really considered what now seems pretty obvious, that train routes would often wind through regions now almost never frequented by car. When I started following this route online, I figured the route would likely trace one of the two main southward routes out of the Buffalo-Niagara region, US 219 or NY 16 (which runs about ten miles east of 219). It turns out that the trains ran roughly between them, through towns I have rarely visited in nearly thirty years of living in this area.

Continuing south, I puzzled over the odd fixture here, just south of a town called West Valley. In addition to our railroad right-of-way, it appears that there used to be a couple of spurs that came off the line and back onto it. Those curving interchange-like lines must be artificial; they're too perfect to be natural. But I can't see any evidence of what must have once existed at that spot for trains to enter and exit the main line. Was there a factory here? A big granary? A mine? Who knows? If anyone in my readership is familiar with the history of West Valley, NY, let me know!

Anyway, our railroad line continues south until it "ends", not in a town, but at a junction of a larger rail line, which runs southwest into Ellicottville or northeast to...well, I didn't follow it that far. But again my assumptions were thwarted; I assumed that this train route out of Orchard Park might lead all the way to Olean in the Southern Tier, but it doesn't. It just goes to a spot in between, ending in another rail line somewhere in the middle of the hills of the Southern Tier.

I wish the trains still ran.
scrawled here by Kelly Sedinger at 11:32 AM

Yesterday, I met someone from Binghamton who reminded me that, in my lifetime, there was once passenger train service from Binghamton to Albany. I love the train but feel they've often been underused in the transportation mix of this country.

If you ever have questions about anything rail-related, the folks of the Western New York Railway Historical Society (WNYRHS) will give you more information than you ever cared to know.