Popcorn is one of my favorite foods, and I'm simply incapable of seeing a movie at the theater without popcorn. If I've just come from a big dinner, as part of a "dinner and a movie" type thing, I'll still buy a small popcorn. I consumed popcorn whilst watching Schindler's List, which is as un-popcorn a movie as has ever been made.

At home, I love popcorn a lot too. For years we've used microwave popcorn exclusively -- usually a "light" version of a "Movie Theater Butter" flavor. Not the healthiest alternative, obviously, but we don't indulge in popcorn all that frequently; once a week, at most. But the trouble with the microwave stuff is that it's full of chemicals and that butter flavor is pretty fake. (Yeah, so's the "buttery topping" they put on the stuff at the theater.)

Part of our general approach toward food in 2010 is to rely less on processed, chemical-laden food products. This, we quickly realized, could also include popcorn. So, we bought ourselves a popcorn popper. 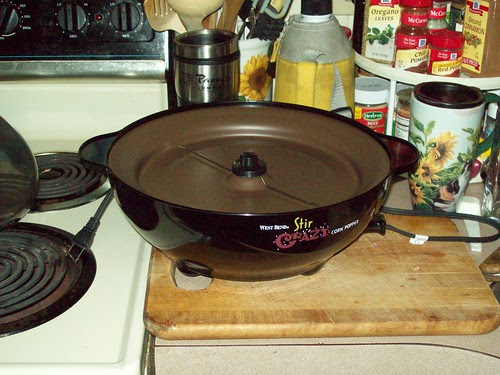 It's a StirCrazy, which we chose because that's what we had when I was a kid. That old version worked wonders, and I realized that I missed that old, clean flavor of popcorn a great deal. The ingredients no longer include whatever chemicals and artificial flavorings go into the microwave stuff; now the ingredients are merely these: popcorn, oil, butter, and salt.

With the StirCrazy, you pour a few tablespoons of oil into the base, and then measure out your corn: 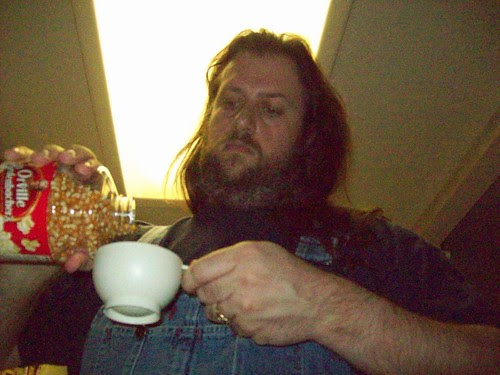 Then you pour that onto the hot plate as well and put the dome cover on top. The cover doubles as a serving bowl later on, but for now, it's a cover and a butter-melter. Here it is: 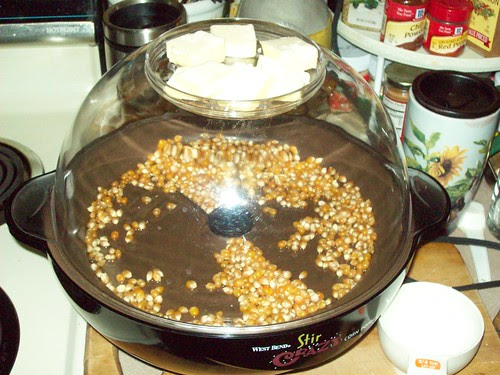 There's an armature (basically a steel rod) that rotates at the bottom of the heat plate, constantly stirring the popcorn and oil. At the top of the dome cover is a well with holes in it; that's where you put your butter. As the heat rise, it melts the butter, which then drips through the holes onto the corn. This arrangement works surprisingly well at getting butter all over the popcorn. (We use unsalted butter exclusively.)

Of course, one can attempt to help the process along by using heat vision, but success will be hard to come by: 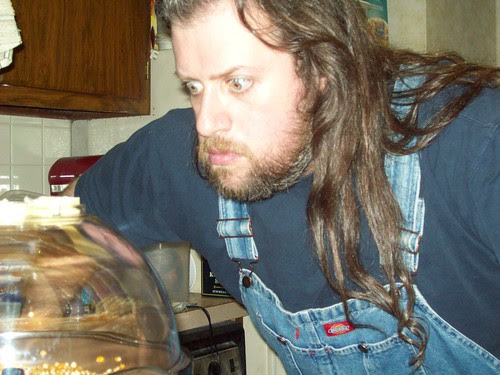 In time the corn starts popping, slowly at first, but quickly filling up the entire dome cover: 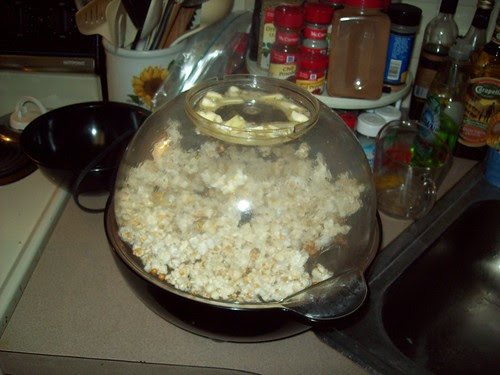 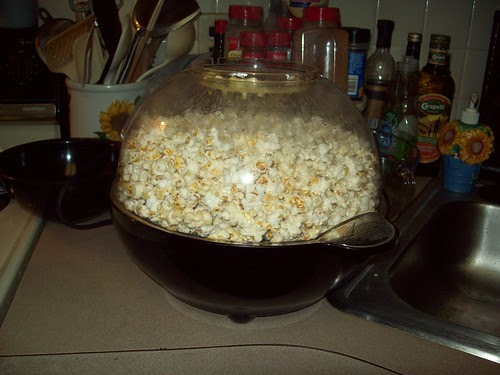 Once the popping slows, you unplug the popper, grab the handles, invert it, remove the hot plate, and voila! A beautiful bowl of popcorn. Salt, stir, and consume.

We'll still keep microwave stuff around, because sometimes it's just plain convenient to be able to nuke a bag as opposed to dragging the popper out. But generally, this stuff tastes so much better, with just good old unsalted butter, Kosher salt, and peanut oil. (I may try doing it with coconut oil sometime, just to see if coconut oil's effect on popcorn is as pronounced as I've heard over the years.) The flavor was not only wonderfully clean and "unprocessed", it took me back to my youth when we'd have a bowl of popcorn prepared just this way (using an earlier model of the same popper) during Family Teevee Night.

I can't recommend this highly enough. If you have any love of popcorn at all, get a good popper. (And not an air popper, either. Those things result in crappy popcorn!)
scrawled here by Kelly Sedinger at 5:31 AM

Doesn't the butter make what ends up as the bottom of the bowl all greasy?

OK, that's it, I'm getting one of those things this weekend, even if it means I have to go to WalMart.

Popcorn is a whole grain and an excellent source of fiber.

Tosy: That happens to an extent, but it's not really avoidable in cases where any kind of hot liquid butter or flavoring is used. It's not unlike the increased greasiness at the bottom of the bag of popcorn you get at the theater. It's not that bad, really, as long as you stir the popcorn a bit before serving. And if you're like me, the little bit of extra greasy goodness at the bottom is not a deal breaker!

Kerry: At Target out here it was $35. Get thee to Wal-Mart! Or Fred Meyer! Or...wherever fine items like this are sold!!!