More queries to answer from Ask Me Anything! 2010. Hooray!!!

Mark asks: Given a choice between Yes or the Who for a Super Bowl halftime show, who would you say yes to?

Roger asks: You have a nom de plume. But now your Facebook page, with your real name, shows up on your blog. So Jaquandor wasn't an attempt at some pseudonym-driven privacy?

It was, originally. I "came of age" on the Internet during the 90s, when pseudonym use was a lot more prevalent. When I launched the blog, I planned to write about a fairly narrow range of topics -- books, movies, and the occasional sports-related item if the whim struck. Problem was, that felt a bit limiting, so I started writing about more and more personal stuff, and over time, the need for pseudonymity and that type of privacy felt less and less important.

Additionally, in 2003 I started writing reviews for Green Man Review under my real name, and I wanted to specifically link my reviews there from my stuff on the blog and vice versa, so that's when I "officially" ditched "Jaquandor" as a permanent pseudonym, or as the only way I identified myself online.

I didn't ditch the name entirely, though, mainly because I liked the name, and plenty of other folks online -- in Blogistan and outside of it -- have done pretty much the same thing. So, basically, at this point it's pretty much of an affectation, although I have just now realized that by putting that Facebook widget on the blog, this is the first time my name has directly appeared here. (But it's always been present on The Promised King, demonstrating the somewhat ephemeral nature of this sort of thing.)

LC Scotty tempts me with a query about Ayn Rand: I know you have little but contempt for Ayn Rand. I'd be curious to hear your take on this criticism of her work?

It's an interesting article, I thought. Basically I read it as "Rand was on something of a right track, but she takes it way too far." A sampling:

While she was hardly the first philosopher to advocate a morality of individualism and rational self-interest, she formulated it in a uniquely accessible way and a uniquely passionate one, not as a dry economic construct but as a bold vision of struggle, creative achievement and romanticism.

All this accounts for much of Rand's appeal. But that appeal is severely limited by the flaws of her world-view.

One of those flaws is Rand's unwillingness to consider the possibility that the values of the free market can coexist with other, non-individualistic and non-market-based virtues--those of family and community, for example. Instead, Rand frames even human relations in terms of trade (our concern for loved ones is based on the positive things they bring to our lives) and offered at best lukewarm support for charitable aid. When charity is mentioned in Rand's fiction, it is nearly always in a negative context. In Atlas Shrugged, a club providing shelter to needy young women is ridiculed for offering help to alcoholics, drug users, and unwed mothers-to-be.

Family fares even worse in Rand's universe. In her 1964 Playboy interview Rand flatly declared that it was "immoral" to place family ties and friendship above productive work; in her fiction, family life is depicted as a stifling swamp.

Saying, as Scotty does, that I have "little but contempt" for Rand is something of an understatement. I consider Rand's philosophy to be utterly loathsome; I find Rand's writing to be appallingly bad both from a technical standpoint and from her nauseating view of human nature; and from what I've read of Rand as a person, she was a spectacularly horrible human being. (I'm not sure what word would best categorize her fascination with child murderer William Edward Hickman, but were I to learn that a living author today exhibited the same feelings for a criminal of today, that writer's books would almost immediately find their way off my bookshelves, were I to own any.)

More irritating -- or, I used to find them more irritating, before I just decided they were laughable -- are Rand's accolytes, most of whom I've encountered cite Rand in much the same way that certain fundamentalist Christians will ask "Have you spoken to Jesus today?" To hear Randites tell the tale, Western Philosophy can be reduced to a line connecting Plato, Aristotle, and then Rand. If Godwin's Law holds that as any Internet discussion gets longer the probability of Hitler or the Nazis being mentioned approaches one, a similar law could be made of Objectivists: as any discussion with an Objectivist progresses, the probability of the Objectivist saying "A can not be not-A!" approaches one. This always amuses me, as it nearly always demonstrates that at the heart of Objectivism lies a particularly childlike notion of duality. A or not-A are the only choices; the idea that a thing can embody qualities of A and not-A at the same time is not to be entertained at all. Randians, or "Randroids" as I like to think of them, simply pronounce themselves adherents to Pure Reason, and therefore, all their conclusions are automatically logical, valid, and informed by reason. Sure. Whatever.

The writer's take here seems to be that Rand is admirable in some way, but she goes too far. I suspect it's pretty obvious that I wouldn't credit Rand with even that much; I find in Rand a general contempt for humanity and a stunning lack of concern for human well-being that couldn't be more at odds with my own worldview. I also find in her a childlike faith in the notion that where a person ends up in life is a function of their own efforts. We Americans love to adhere to varying degrees of this notion, but the older I get, the more terrifying I find the degree to which pure, dumb luck dominates our lives. (Example: I have a good job now where I'm learning a lot of new skills. Yes, I work hard both to get my jobs done and to learn those skills, but had I not been lucky enough to put in my application at a time when my predecessor was someone who sucked, I'd be doing something else right now.)

The writer of the piece lauds Rand's status "as a promoter of the ideas of individual liberty, reason, and the free market". I find nothing admirable in Rand in any of those categories; her concept if individual liberty is infantile, "reason" for her is nothing more than a blunt instrument that leads to predetermined conclusions, and I can't see where anything good has ever come of worshiping the free market as a good inherent in itself.

Ultimately, I would respond to the RealClearPolitics article by quoting two others. First:

We all live every day with the victory of this fifth-rate Nietzsche of the mini-malls. Alan Greenspan was one of her strongest cult followers and even invited her to the Oval Office to witness his swearing-in when he joined the Ford administration. You can see how he carried this philosophy into the 1990s: Why should the Supermen of Wall Street be regulated to protected the lice of Main Street?

The figure Ayn Rand most resembles in American life is L. Ron Hubbard, another crazed, pitiable charlatan who used trashy potboilers to whip up a cult. Unfortunately, Rand's cult isn't confined to Tom Cruise and a rash of Hollywood dimwits. No, its ideas and its impulses have, by drilling into the basest human instincts, captured one of America's major political parties.

Rand’s particular intellectual contribution, the thing that makes her so popular and so American, is the way she managed to mass market elitism — to convince so many people, especially young people, that they could be geniuses without being in any concrete way distinguished. Or, rather, that they could distinguish themselves by the ardor of their commitment to Rand’s teaching. The very form of her novels makes the same point: they are as cartoonish and sexed-up as any best seller, yet they are constantly suggesting that the reader who appreciates them is one of the elect.

And I saw this just recently: 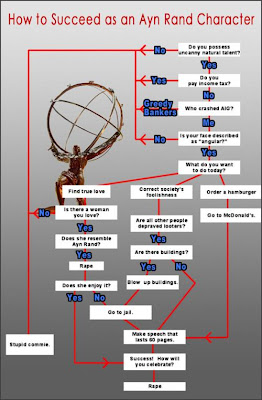 Unfair? Maybe...but it seems to me that the main freedom Rand symbolizes is nothing more than the freedom to be a boorish asshole. Sure, you have the freedom to be just that, but if you exercise that freedom, well...you're a boorish asshole. As for the Randroids, as I once responded to someone who told me that I shouldn't judge the book (Atlas Shrugged) by its cult, I'm not -- I'm judging the cult by its book.
scrawled here by Kelly Sedinger at 9:12 PM

Email ThisBlogThis!Share to TwitterShare to FacebookShare to Pinterest
Labels: Ask Me Anything 2010

You dodged that question about Yes vs. The Who so well that your non-answer could be considered "Ram tough."

I admit I have not read Rand and know of her only through second-hand accounts, but from what I've heard, I'd say she and her acolytes are sociopaths. They lack empathy, they're narcissistic, they're superficially charming, they're vindictive against those who cross them, they have no sense of guilt... sounds sociopathic to me.