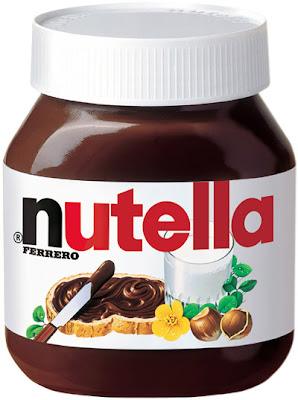 So, for years, I've wondered about the stuff in the plastic jars. I'd see them when shopping, and occasionally wonder if the stuff was good, but for some reason...I couldn't summon up the urge to try it. I'm talking about...

I don't know why it took me years to get around to giving the stuff a shot. Maybe it's the name? It sounds vaguely medicinal, and the jars with the type and the picture look like something out of the 1970s, and stuff out of the 1970s tends to not be all that great.

The problem with this rationalization is, of course, that it's stupid.

I mean, really. That's pretty dumb on my part. Nutella's made of hazelnuts, which I like, and chocolate, which rocks. So I finally decided last week to get over it and buy a jar of the stuff.

Still, I had to work through my initial skepticism in trying it:

I scooped some up on a butterknife, put in my mouth, and:

And...yeah. Nutella's good stuff. Sometimes I'm slow on the uptake! Now I have myself a new official "Breakfast of Champions":

I have an English muffin with Nutella on one side and lemon curd on the other, with a glass of OJ to wash it down. (Lemon curd's another story -- I love that stuff and tried it with no fear, the first time I learned of its existence. Lemon curd makes me all kinds of happy.)

So: Nutella's good stuff. Who knew? (I know...everybody knew. Shut up. I reserve the right to be dense sometimes.)
scrawled here by Kelly Sedinger at 9:22 PM

My daughter has a peanut allergy and has to avoid nuts. We went over to someone's house who was told this beforehand. Guess what we were offered for lunch? Nutella! And a bread she couldn't eat either. Made me cranky. Guess I'm less enamored with it than you are.

Stuff out of the 1970s tends not to be all that great?! Have you forgotten that one there movie that you and I have in common? :)

I am so embarassed to admit this but I too have a love for Nutela but my love came at a terrible terrible price - my soul.

One day I went to get the mail and in the mailbox was two sample packs of nutela. Jam packet sized like at Denny's. I decided to open one up and try it.

It was the greatest thing ever. I think I might have a hazelnut addiction or something because I went at that packet like it was crack. I think I even swallowed the second packet whole.

Then I did something evil. I called a friend to come over. She did. Now understand, I realized fully that I could just ask her to go to the store and pick me up some Nutela in the jar and all would have been well.

But no, I asked her to go to my neighbor's mailbox and steal their Nutela sample pack so I could feed my habit. She thought it was funny and did just that as I watched from behind the plant in the living room.

I ate those two also but felt so guilty that to this day I will not eat Nutela to punish myself for my actions. Now that is some sick shit.