OK, folks, it's time to start providing answers to the questions submitted for this year's version of Ask Me Anything! Some short and easy ones to start with.

"Quince" asks: Since the housing market is becoming very buyer friendly do you think you will buy a house anytime soon?

I don't know. I'd like to eventually, but we live in a pricier town, real estate-wise, and I'm loathe to move somewhere we can get a cheaper house because The Daughter is going to a wonderful school district and has a lot of friends. I'm not big on the idea of uprooting her just to get a house more cheaply. We'll see.

Mark wonders: Will the Bills' uniforms ever look good? Not just no teal, therefore good, but cohesive, distinctive and low on eyestrain good?

They do already, twice a year at least: their current "throwback" uniforms look pretty sweet: 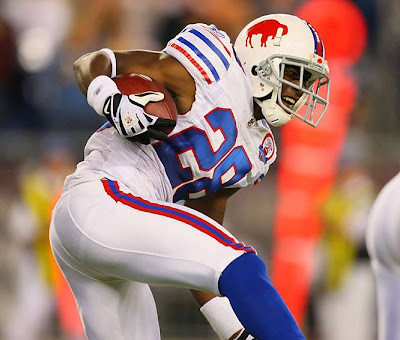 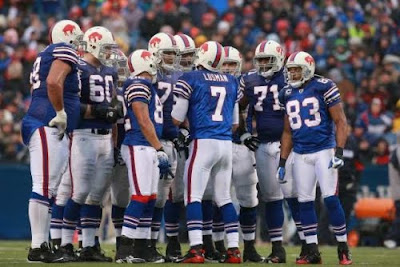 Now, I've never been as down on their current "regular" uniform as many, but I never saw any rationale for change, except for the usual one: money, as in, getting fans to buy new jerseys.

(By the way, on the topic of fans buying jerseys, it really bugs me when people get their own names put on the back of a team jersey. Especially if it's a number long associated with a well-known player. So if you're a Bills fan named Schmidt, you don't get to put "Schmidt" on the back of a jersey whose number is 12. That doesn't work at all.)

LC Scotty asks: I've never read any Heinlein, and you being the skiffy expert around these parts I was wondering if you had a suggested order for diving in.

Sadly...I have no idea. I haven't read much Heinlein at all. I tried several of his novels several years ago and bounced off them all. Now, I was trying to read his more "serious", "adult" SF, and not the "juveniles" he was known for (like Starship Troopers), so maybe those would be a good place to start. Sorry!

(I have read some Heinlein short fiction, though, and liked it well enough, although I can't recall any titles.)

Glenn asks: If the average American family size is 3.14 people, and the average American consumes 0.73 gallons of ethanol from distilled spirituous beverages per year, and my favorite bourbon contains 45% alcohol by volume, what is is the combined cubic capacity of household freezers in any given 100 kilometer block, and should I serve it over ice?

This seems like a trick question, one of those questions my physics teacher used to put on exams that he would load up with what he called "confusion factors" -- i.e., numbers tossed into the question to act as red herrings for the students. In my opinion, bourbon should always be served over ice. I think it goes down better.

I prefer my rum at room temperature if straight, although cold rum is just fine, too.

More answers to come! Good questions this time out. (And if anyone tried to sneak in another question after I've already declared the submission period over, well, I might not notice until after I answered it....)
scrawled here by Kelly Sedinger at 4:45 AM

Email ThisBlogThis!Share to TwitterShare to FacebookShare to Pinterest
Labels: Ask Me Anything 2010

Re: LC Scotty's interest in Heinlein, I was a big fan of the juveniles when I was younger but never developed a taste for Heinlein's later, "grown-up" work. Basically, it just got too weird for me.

I re-read some of the juvies last summer and still enjoyed them, although there's no question they are artifacts of their time, i.e., the 1950s. They exist in this weird alternate-history future where boys still work at soda fountains even as space stations are being constructed in orbit. If you're not daunted by that (personally, I found it kind of charming), then go ahead and give them a try. Wikipedia has a comprehensive list of them, with entries for each individual novel, so you can pick and choose what sounds interesting...