Different kinds of weirdness from the week gone by:

:: I knicked this photo from this post by Neddie Jingo, because I thought it was hilarious. For all I know, this may be one of those types of graffiti that are known the world over and which I somehow have completely missed, but anyway: 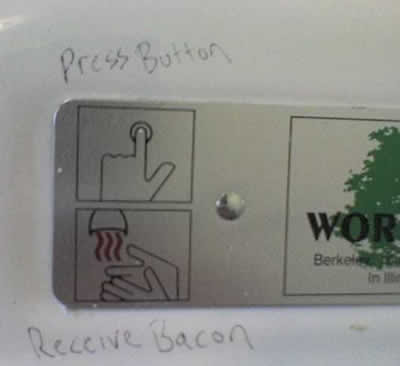 In conjunction with this John Scalzi post, I envision John just standing there, hitting the button over and over again, chortling like a Vegas gambling addict who can't stop putting money in the slots, as he basks in vending-machine bacony goodness.

:: I work with this guy at The Store:

Here he is again, in a longer one, with some other guy:

:: Remember in Wayne's World, when Wayne and Garth engage in the pastime of lying face-up about twenty feet from the leading edge of one of O'Hare's runways? Well, check this out:

Here's another, and note the dust and wind that gets kicked up by the jet's wake:

MeFi has an entire thread about this kind of thing right now. That airport has a really short runway, with water pretty much flanking in on all sides. Here's the cockpit's point of view of that same approach:

And here's an entire gallery of landing sites to test the mettle of any pilot. Frankly, as neat as the St. Maarten Island landing looks, this one would scare the living crap out of me. 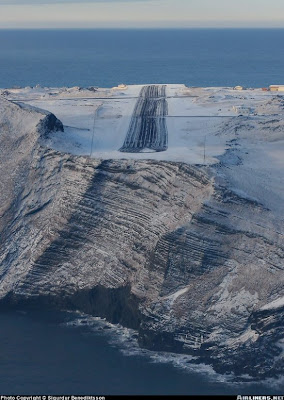 I wouldn't land there with Han Solo at the controls!
scrawled here by Kelly Sedinger at 11:09 AM