I'm so pleased you're not dead!

I have to admit that my geek heart goes a little pitter-pat every time I read something about Indiana Jones and the Journey Back to the Well One Last Time. This time I learn that Karen Allen, who played Marion Ravenwood in Raiders of the Lost Ark, is back on board. And what's more, it appears that since 1981 she has aged about six years: 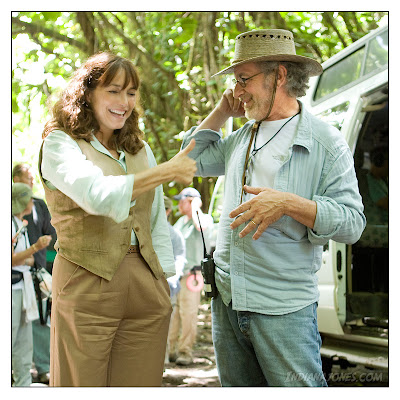 I'm still skeptical about this movie, but we'll see.

As long as I'm on the subject of Dr. Jones, I may as well run down my thoughts on the original three movies:

:: Raiders of the Lost Ark is, of course, a great movie. When I saw it in 1981 it pretty much took my breath away, being the first cinematic adventure of its type I had ever seen. (Within a year I would discover Errol Flynn. What a great time that was to be a ten-year-old geek!) My father, who attended the movie with us knowing nothing about it at all, was appalled at the violence, especially at the very end, but I thought it was just the coolest thing. The movie was rollicking fun, it contained exactly enough romance to convince a ten-year-old that seducing lovely women is what adventurer-archaeologists do and not one minute more, it had surprises, it had exotic stuff, it had John Williams at the height of his powers. How good was Raiders, in my eyes? Well, for one summer it got me to stop wondering if Han Solo would survive carbon-freeze.

I remember seeing it several times in 1981. The first movie we rented when we got a VCR was Raiders, naturally enough. It was when we rented it that I first saw the reflected cobra in the glass pane in the Well of Souls. Strangely, it took me until the late 1990s before I worked out the math of how high the Staff of Ra is and compared it to the scene in the Map Room, which would have to imply that Indiana Jones is four feet tall. I don't remember when I noticed the fly crawling into Belloq's mouth, but I think that was pretty early on. (And I've always wished that the film would have explained better just how Indy knew not to look on the power of the Ark.)

:: I was in seventh grade when Indiana Jones and the Temple of Doom came along. I loved it too at first, but then I decided at some point that I hated it -- Willie Scott's whining got to me, I guess, as did the bit where they jump out of an airplane with only an inflatable rubber raft to break their fall. However, I gradually came to like it again when I watched it in college. It has a very different flavor than Raiders, which I appreciated; I liked its much darker tone and its foray into Eastern mysticism. I actually like the Short Round character, particularly the scene where he awakens Indy from the "Fever of Kali" (or whatever it was called). If anything, I now feel that Temple of Doom is underrated. (And another cracker of a John Williams score -- his "Parade of the Slave Children" theme is one of his very best.)

:: I also loved Indiana Jones and the Last Crusade when it first came out, and I came to like it a bit less over time. With this one, however, my opinion of it hasn't really rebounded. It's still a lot of fun and compulsively watchable, but it suffers a lot on several key grounds. Yes, Harrison Ford and Sean Connery have great chemistry, but the whole bit about how they both slept with Elsa the Nazi Archaeologist is just creepy and doesn't really add anything to the plot. The plot itself is basically a massive retread of Raiders. (Don't believe me? Which film am I describing here: "An old authority figure from Indy's past turns out to have been very near to discovering the last resting place of one of Christendom's most famed and legendary artefacts, and Indy is off to pick up the trail where this old authority figure left off. Along the way Indy enlists the aid of his friend Sallah, where he eventually ends up in the Middle East racing the Nazis to finding the artefact, at one point engaging a thrilling chase with an entire convoy of Nazi vehicles. In the end, the villains are undone because they've failed to understand something about the power of the Christian artefact that Indy has already figured out.")

Sallah is turned into something of a buffoon, and Marcus Brody -- whom Raiders implied to be Indy in later, civilian life -- is reduced to near Jar Jar Binksian status. (The scene where the Nazis manage to capture Brody is just painful to watch.) Last Crusade is the most directly cartoonish of the Indiana Jones movies. And at the leap of faith toward the end, when Indy takes the step and plants his foot down on thin air, he looks astonished that it's worked. Shouldn't that look of astonishment therefore represent that he didn't have faith at all, and thus he should be plunged to his doom?

Anyway, I hope this new movie is good. I really do.

(Photo of Karen Allen via)
scrawled here by Kelly Sedinger at 8:54 PM

So here's an important question: do you have a section of whatever it is you call women that meet your standard of physical beauty (I'm blocking on it - G something)? If so, is Karen Allen in it?

i agree with you almost across the board here: Raiders is great. Temple of Doom grew on my. never liked the camp Last Crusade that much.

I loved all the Indiana Jones movies, flaws and all, and can't wait for the new one. (Hey. It's Harrison Ford. What can I say.)

yes, I loved them all..... there was something about him having a high fever during the filming of one of the movies and he stapled his hat to his head in order to keep it on...... anybody else hear that?

Karen Allen is sort of schoolmarmish here... although, in case she is doing a vanity search on her name at some point, I am sure she has an amazing sizzling presence when she wants to..... hopefully...... never mind.

I don't know about the staples, but the famous bit in Raiders where Indy simply shoots the swordsman in black was an ad-lib by Ford, who didn't feel well while filming that day. Apparently there was some big fight scene between Indy and the swordsman, but Ford, not wanting to film it, said, "Couldn't I just shoot him?"

oh, and I loved that scene... great comedic value. I think sometimes the best scenes happen by accident.