Yup, I saw The Simpsons Movie the other night. A great time was had by all. Well, by me and the three guys I went with. The rest of the theater? Don't much care if they had a great time. Jerks. (Especially the idiots who can't seem to go ten minutes without sending a f***ing text message, whether there's a movie on or not. Sure, texting is less pernicious than, say, actually talking on the phone or getting up from the middle of a row of theater seats to go outside and answer the call, but it's still a darkened theater, and the sudden blue-white glow of a cell phone being opened so someone can text back to some idiot friend of theirs is really distracting.)

Anyhow, I found the movie very funny, although not quite "Marge versus the Monorail" funny, or "Stonecutters" funny, or "Twenty-two Short Films About Springfield" funny, or "Bart's Comet" funny, or "King-Size Homer" funny, or "Cape Feare" funny, or...well, you get the idea. But it's very funny indeed. It's got all the hallmarks of good Simpsons humor: subversive stuff that skewers, well, everything; entire subplots that turn out to be mere set-up for something completely different later; Homer exhibiting cluelessness on a scale unimagined before; perfectly-placed one-liners from Ned Flanders and Ralph Wiggum.

Nearly every negative review I've read of this movie basically boils down to a laundry list of favorite characters who don't get enough screentime, which is frankly unavoidable, given the sheer numbers of memorable people in Springfield. I think that some people expected the movie to be about Springfield, rather than about the Simpsons, but like any Simpsons fan, I wish more had been seen of a number of folks: Mr. Burns, Smithers, Apu, Principal Skinner, Superintendent Chalmers, Patty and Selma, and so on. And I think it would have been great if the movie had been dedicated to the memory of Troy McClure -- they could have even had a screen credit reading, "To the memory of Troy McClure, whom you may remember from such films as..." and then list them.

A film music geek moment: The music by Hans Zimmer was actually decent, although when the end credits roll got to the music credits, there were so many names listed as assisting with the music, orchestrating it, and conducting it (how does the score for a movie that's not even ninety minutes long require two conductors?!), that as always, I end up wondering just what it is that Hans Zimmer actually does when he's "composing". I can never make up my mind about Zimmer: more often than not I end up liking the resulting product just fine, but his "composition by committee" thing rubs me wrong somehow. I also wish that somehow they could have had an Alf Clausen musical number in there, although I did love how the throwaway "Spiderpig!" ditty improvised by Homer ends up actually playing a funny role later on. (And make sure you stick around through the credits, so that you can hear the "Springfield Anthem".)

So yeah, I liked the movie. It was a lot of fun, which is exactly what it should have been.

By the way, I went to simpsonsmovie.com and made my own avatar: 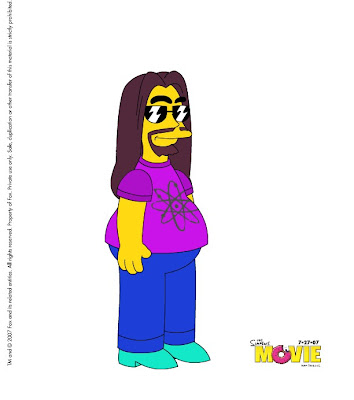 (No, there's no option for overalls there that I could find, so it's blue pants. And no, I don't own shoes in that color. But I would, because they're pretty and I'm all about the pretty.)
scrawled here by Kelly Sedinger at 10:46 AM