One of the unfortunate mainstays of Buffalo's outer waterfront the last bunch of years has been the presence of an old ship that basically got docked here and then forgotten about, as it rusted in its moorings for years and years. Well, that ship has finally been taken away, towed out of Buffalo's waters on its final voyage. Although the ship's fate is apparently now unclear, I suspect it will ultimately sail to the fabulous land of India, where it will likely end up in a place like this: 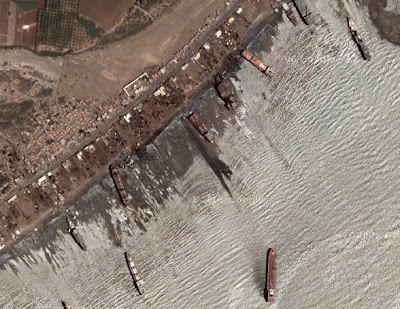 That's a shipbreaking yard on the coast of India, where decommissioned ships are literally run aground and then slowly dismantled by laborers. It can be very dangerous work, so let's hope that the former blight on Buffalo doesn't ultimately end someone's life when it reaches its ultimate destination.
scrawled here by Kelly Sedinger at 5:20 PM