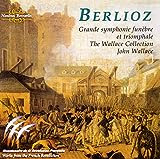 Since yesterday was bastille Day, this CD of French revolutionary music performed by London's Wallace Collection, a fine wind ensemble, leaped to mind. This disc includes a number of works for wind band composed during the years of the French Revolution, such as one of the oldest settings available of La Marseillaise.

The star attraction here, though, is Hector Berlioz's fourth symphony, his Symphonie funebre et triomphale. Composed in 1840 upon a commission for a ceremony to commemorate the tenth anniversary of the 1830 Revolution (the French like to revolt a lot, apparently), Berlioz's "Funeral Symphony" is a long work in three movements for wind band only (although he later added parts for chorus and strings in the last movement). It's a very compelling work, even if Wagner's prediction that "this Symphony will last and exalt the hearts of men as long as there lives a nation called France" has not come to pass. (The "Funeral Symphony" is rarely performed, and has never come close to entering the standard repertoire either for wind band or for orchestra.)

Of the three movements, the first -- a titanic funeral march that lasts some fifteen minutes -- is the best, although the other two movements are not without their charm. The last movement, entitled "Apotheosis", provides the "triomphale" part of the score with a long series of brass fanfares that break into a fine marching melody, and when the chorus enters toward the end, the result is thrilling.

The second, middle movement is a "Funeral oration", the melody of which Berlioz reworked from an operatic project he had previously abandoned. (Berlioz was never one to allow a melody to go unused.) That long and stately melody is given to a solo trombone, and I've decided to make an MP3 of that movement available for a time as tribute to Scott Parkinson, the Buffalo Philharmonic trombonist who died unexpectedly and tragically two days ago. I have no idea if Parkinson ever got to perform this piece -- I rather doubt it, but you never know. That movement can be heard here.


UPDATE, 8-7-04: I have removed the musical selection linked above.