I launched this series a month ago, intending to update it every couple of weeks or so; then, intervening events threw it right out of my mind, until now. If anyone's been waiting for this, sorry! And now, continuing my examination of the Statehood Quarters.

Here we have a quarter deliberately trying to tie itself in with pop culture, with Virginia riding the coat-tails of Disney's movie Pocahantas, which had come out seven or eight years earlier. How shameless is that!

OK, just kidding there. The founding of the Jamestown colony is, obviously, one of the most important events of early American history, and this quarter features a beautiful design of the ships arriving on the shores of what would become Virginia. In practice, I do think that the design is a little too busy for the small surface of the quarter; maybe if they'd only shown two ships instead of three the picture would be clearer. But it was smart of Virginia to tie their quarter to the impending quadricentennial of their state's founding. 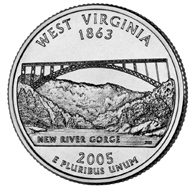 OK, so West Virginia's not going along the coast, but it seems silly to talk about one Virginia and not the other one, so here's West Virginia. They went with a depiction of one of that state's most famous bits of scenery, the New River Gorge with its stunning bridge. There's not much I have to say about this, except that it's very well done. This is one of the better quarters in the series. (Although I admit that I'm surprised they didn't find some way to get Robert Byrd's name on their quarter, because in West Virginia, Robert Byrd's name is on everything.)

Here's a depiction not of a famous person or scenic locale, but of a very famous event: the first airplane flight at Kitty Hawk. Again, I don't have much comment on this one. It's very nice, although the plane, reduced to that small size, ends up looking a bit like a lopsided ladder. Might have been done a little better, but I like the idea a lot.

Design-by-committee strikes again. South Carolina crams so much stuff onto its quarter that the entire thing's a mishmash. There's a state outline, a tree, a bird, a couple of flowers, a motto, and a star in the middle of the state outline demarking the location of the state capital! Too, too much. There's nothing here to really look at; this is a quarter that one looks at, says "Hmmm, South Carolina", and then sticks the quarter into the slot along with three others to get a bottle of Pepsi. I don't like this one.

Here's more design-by-committee, although it's better executed than South Carolina's. Georgia-related plants curling up the edges of the coin, a peach, a boring state outline again, and another motto ("Wisdom, Justice, Moderation"). Again it's too much, although the motto's execution is creatively done, as Georgia didn't just print the motto on the coin but depict it as being printed on a banner draped across the coin. The peach is nice, too, but I think it should have been larger – dominant, even. The big missed opportunity here, though, is that I think the quarter probably should have featured Dr. Martin Luther King Jr. 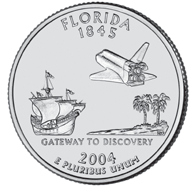 I want to like this one, because I like what it's trying to do...but I don't think it works very well at all. The quarter tells us that Florida is the "Gateway to Discovery", so we have a sailing ship approaching a sea shore with a couple of palm trees, and floating above that is the Space Shuttle. The problems are that the seashore looks totally divorced from the sailing ship – are they landing there? sailing by? getting ready to fire cannons? - and that the Shuttle is hanging in space up there, with no context at all of its own. They'd have been better served, with this theme, to ignore the sailing vessel landing entirely (really, lots of places in America were the scene of vessels from Europe making landfall, and Virginia already covered this territory in much better fashion) and just go with the space theme, in which case they shouldn't depict the Shuttle apparently in orbit or final approach, but launching. A rocket launch would have made a terrific quarter, wouldn't it? Florida seriously missed the boat on this one. 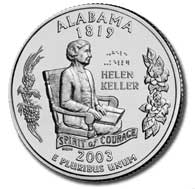 Moving along the Gulf Coast now, we're at Alabama. They've got their plants vining up the side of the coin too, but two different plants: a long-leaf pine branch and magnolia, so that's interesting. But in the middle of it all they've got Helen Keller, whose chair is draped with a banner reading "Spirit of Courage", and in an inspired bit of design, they identify Keller not just with English lettering but with Braille. This quarter is very original. (It also strikes me that Alabama, which is now one of the most conservative states in the country, chose for its quarter to depict a woman who, although most famous for her overcoming her disabilities, was a very vocal figure for the political left in her day.) 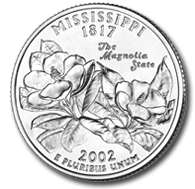 There's no reason to beat around the bush here: Mississippi's may be the most beautiful of all the state quarters. In fact, scratch that qualifier; this is the most beautiful of the state quarters. Two flowers that render wonderfully in struck metal, and the motto "The Magnolia State" is rendered in a script font as opposed to the block lettering that has dominated the Statehood Quarters. Well, well, well done, Mississippi! 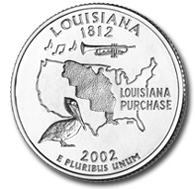 Here we have two possible design ideas crammed together by committee to the cheapening of each, combined with a third design idea that nobody would have missed had it not been there at all. They should have either honored the Louisiana Purchase by itself, or New Orleans as the birthplace of jazz by itself, but they cram both onto the coin. With a pelican for good measure. Nothing works very well on this quarter, I'm afraid.

There we stop for now. Next time I'll start with Ohio and proceed westward across the Great Lakes region and the Upper Midwest.
scrawled here by Kelly Sedinger at 9:27 AM

This is awesome, and I agree with many (most) of your points.

I especially love (being on the Left) that Alabama honored Hellen Keller.