Just testin' out my hammer. 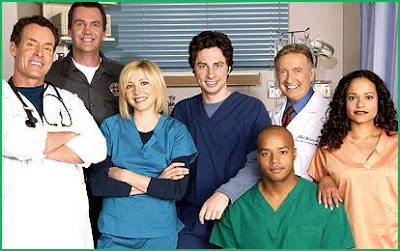 In the "Credit where due" department, I just have to give major props to the creative geniuses behind Scrubs. Apparently this is to be the show's final season, and man, is it ever going out on a strong note. This season has been one terrific episode after another, each one filled with laughs and poignant insight that have been the show's hallmark since it first aired. I love that they've found ways to keep Dr. Kelso relevant even though he's retired, that they're doing the logical things with Dr. Cox, that the new interns are turning out to be interesting characters in their own right, that JD and Turk still engage in all manner of craziness, that the Janitor continues his unique brand of lunacy, and that they've managed to come up with a convincing way to give Ted a girlfriend.

I am so going to miss this show when it ends, and ABC's picking it up for one final glorious run almost gets that network off my hook for canceling Once and Again back in 2002.

And Sarah Chalke and Judy Reyes are just getting more and more beautiful! Wow, am I going to miss this show.
scrawled here by Kelly Sedinger at 6:50 AM

Anyone who agrees with me on the beauty of Judy Reyes is A-OK in my book. ;-)

However, I'll take the fifth on actress Sarah Chalke because a female friend of mine kids me enough about my taste for blondes.

And yes, it's good that you actually think that this final season is quite good. I worried about the direction this series was taking after their introduction of the Elizabeth Banks character--particularly when they started making her an unsympathetic character.

I'm hoping the final season is as good as you say it is because all too many of my favorite TV shows have tended to have very awful last seasons. It would be nice if this show was an exception.