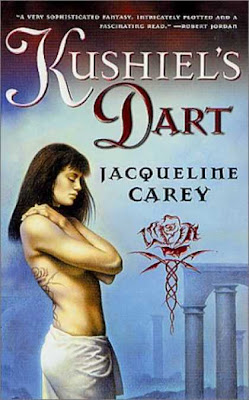 Kushiel's Dart is the first "fat fantasy" I've read in a long time; and I enjoyed it so much, I may find myself shying away from the genre for a while for fear of disappointment in whatever Fat Fantasy book I pick up next. Jacqueline Carey has crafted here a novel that put me in mind of Guy Gavriel Kay; in fact, I thought more than once while reading it that this is what GGK would have written if he'd been a woman. This was a wonderful, wonderful book that only let me down at the very end, when it came time for Carey to set things up for the sequel.

The setting was the first thing about the book to remind me of GGK. We're in a land that is basically Europe with the names changed, and the history is strongly based on Europe as well. In their "Middle Ages", the main action takes place in the City of Elua, named for Blessed Elua, an angel born in the aftermath of the crucifixion of Yeshua more than a thousand years before. Blessed Elua and his followers established a land where the guiding priciple is Love as thou wilt. Into the service of Naamah, one of Elua's followers, comes our heroine, Phedre, whom we meet as a child but who grows up before our eyes over the course of this 900-page novel. She is sold into the service of Naamah, which makes her a courtesan; later, she comes into the direct employ of a charismatic teacher named Anafiel Delaunay, who turns out (as does everybody in this complex book) to be much more than he seems. Phedre learns much about the world while in Delaunay's service, much that eventually puts her in danger as she finds herself engaged in the court politics of this dangerous land; but Phedre is a good student and sharply intelligent, so she becomes as much a player as an observer over time.

I don't want to say a whole lot about the plot of this book, not just because I wouldn't want to spoil it, but also because it's a hard book to summarize. It's very long, being the type of book one loses oneself within. One of the book's most important characters, Joscelin Verreuil, who serves as bodyguard (and eventually much more than that) to Phedre, isn't introduced until after page 250. This is an actual epic of a book, with the action ranging over virtually the entire continent of "Europe". Along the way we meet roving bands of gypsies and their king; we travel north and east into the rugged lands dominated by Viking-like warriors called Skaldi, who are gathering underneath the banner of a new warlord; we travel west, over the straits, to the barbarian island realm where the blue-painted warriors fight for dominion. We meet the Master of the Straits, the being who controls the weather in the straits between Alba and Terre d'Ange (think the English Channel), choosing who gets to make passage and who doesn't. We meet nobles motivated by love and by hate, soldiers motivated by money and by loyalty, lords motivated by revenge and lust, and noblewomen whose motivations can't even be summarized in any real way.

Kushiel's Dart is the start of a series, and I have every intention of continuing on. It takes a really good "Fat Fantasy" to capture my attention these days, but this one did. Carey creates a vivid world here, familiar and fantastic, and she populates it with memorable people who stand out and command sympathies – even the villains. I loved this book.
scrawled here by Kelly Sedinger at 5:40 AM

This has long been a reccomendation of Deborah's, but I've never picked it up. I'll have to remember to look out for it when next at the book store.

What, in the name of Crom, is "Fat Fantasy"?

"Fat Fantasy" refers to fantasy novels of doorstop thickness. Like those 1000-page tomes by Robert Jordan or George RR Martin. (Lots of people think of Lord of the Rings as Fat Fantasy, but by today's standards of fatness, LOTR is positively brief. LOTR in its entirety is shorter than the first two novels of Martin's "Song of Ice and Fire" series.

What you call "fat fantasy", I traditionally refer to as "the Steven Erickson Syndrome".