The number of the count shall be three.

SamuraiFrog opines on the Trilogy Meter, and I shall do the same! Because that's what I do. The same as everybody else. First, here's the meter, denoting the level of quality for each film in the trilogy in question: 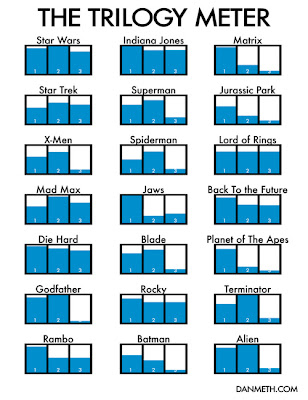 A disagreement, first off! I know I go against mainstream orthodoxy on this point, but I still personally rank A New Hope ahead of The Empire Strikes Back. But just barely. I couldn't live without a single Star Wars film; I even think Return of the Jedi is unfairly maligned much of the time.

Of course, my ongoing adoration of the Prequel Trilogy continues, even as I fix them.

I do think Raiders is the best. I think that Temple of Doom is better
than Last Crusade, however.

I liked The Matrix when I first saw it. I liked it a bit less each time I saw it thereafter, and I haven't watched it in a long time. I tried watching Reloaded a single time and fell asleep in the first half hour.

After that, I'm done with The Matrix.

Hmmmm. See my Star Trek Redux posts, linked in the sidebar, for more. I like TMO; I enjoy Wrath of Khan but think it's overrated; I think Search for Spock is actually underrated. As for the rest of the movies, look for those older posts of mine.

I've never understood why so many people think Superman II is better than the original. It's good, but the first is iconic. Superman III has some actual good stuff in it, but it's buried under some seriously bad stuff. Superman IV is crap, of course, and I actually liked Superman Returns.

I love the first one, to this day, even with all the annoying kid stuff. The second has some fun moments, particularly when they get to San Diego; and I could look at Julianne Moore all day. But it's not a very good movie (thirteen year old kid defeats a velociraptor with her mad gymnastics skills -- was this Jurassic Park II: Gymkata?). Never saw the third one.

The first one feels to me like they took a terrific movie and cut out forty minutes of stuff that made it terrific. I loved the second one. Never saw the third, after being told by numerous people that it was awful.

Liked the first, with reservations; loved the second; liked the third, with more of the same reservations. Basically I hate the way the movies have handled Gwen Stacy: if you're gonna have her, then she has to (a) be Peter Parker's first love, not Mary Jane, and (b) she has to die. It drives me crazy that neither of these are the case in these movies.

The Lord of the Rings

It's not a trilogy. It's one story in three movies. That said, I've never found that Two Towers suffers from the "middle act" syndrome; I thought that Jackson and company figured out an elegant way around that.

The first is, of course, a great movie, one of the greats of all time. The second isn't as bad as many think. The third is pretty bad. And the fourth? One of the worst movies ever.

Back to the Future

Love the first. I like the next two as curiosities, and I even think they're a bit underrated. The first is the real business, though.

I love all of these. The first one is definitely the best, but the next two aren't bad by any stretch; this may be the most successful trilogy I can think of, in terms of overall quality of the movies. I liked how the each one did something different -- i.e., they didn't just reframe the "hostages in a claustrophobic setting" bit from the first movie -- and I loved the perverse riddles in the third one, as well as some very strong acting from supporting players like Graham Greene and a guy (whose name I don't recall and am not looking up right now) whose main claim to acting fame is having been on As the World Turns for years and years.

I haven't seen the fourth one.

Didn't see any of these.

Planet of the Apes

First one's good. I have no idea what I've seen of the rest of this series.

I've never seen any of these all the way through. I know I should, but mob tales don't interest me much. Someday I'll get around to them, but I just don't make it a high priority.

The first two are equals, and they're classics. Didn't see the third.

I hate these. They suck. Sorry. I'm not even that big a fan of the Jerry Goldsmith scores for these.

I didn't care much for the first one. Everybody talked about how "dark" it was, but it wasn't! It played everything for laughs. The second one, though? I liked that. It was really dark and grim. I also really liked Val Kilmer's turn as Batman in...whatever that one was called.

Batman Begins is a terrific movie. I haven't watched The Dark Knight yet.

I don't like any of the Alien movies. The first one is splatter and gore; the second is just one expected plot twist after another. The third and fourth ones are shite. Did they make a fifth one? Did I care? Not really. I think this is the most overrated movie franchise in existence.

What trilogies didn't get depicted here? SamuraiFrog mentions the Lethal Weapon films. I have a lot of fond memories of those movies; they were our standard fall-back movies in college. Bored night on Friday? Get some beer and some pizza and watch Lethal Weapon. I love each one. My personal favorite, really, is the third one; I love a lot of the second one, but parts of the third act get really too depressing, especially the death of that poor girl. And the first is terrific stuff. I only saw the fourth one once. It was OK.

How about The Karate Kid? The first one of those is great; and I like the second one a bit. The third is crud, and I never saw the one with Hilary Swank.

They made three Scream movies, didn't they? The first one is crap, so I didn't see the others.

What trilogies are we missing, folks?
scrawled here by Kelly Sedinger at 11:02 AM

One of the cable channels has been showing the Godfather movies over and over again for a couple of months now. I haven't bothered to watch them. Mob stories don't interest me either.

The third Terminator movie is my favorite. I don't care how many times they show that one on cable.