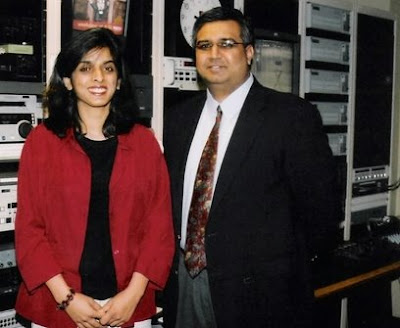 There was a shockingly brutal murder in my town little more than a week ago. An Arab-American woman named Aasiyah Hasani was stabbed and beheaded, police allege, by her husband, Muzzammil. They were the owners of a fledgling teevee channel that was, apparently, Aasiyah's brainchild and dream. She wanted the channel to help change the common stereotype of Arabs as being terrorist-minded, violent people -- but it turns out that her married life was a long tale of abuse, that ended horribly. There is speculation that Aasiyah's murder was an honor killing.

When I first saw the above photo in the Buffalo News, I couldn't shake the feeling that I knew Aasiyah from somewhere. True, we live in the same town, so we might have crossed paths at the library or wherever; the studios for their teevee channel, where the murder took place, are only a block away from my church. But when reading today's News article (linked above) about Aasiyah's difficult marriage, I realized where I "knew" her from: for a while she ran the local 7-11 franchise, where we used to go at least once a week, usually after our trip to the library, for Slurpees and Pepsis.

I remember seeing Aasiyah there, milling about behind the counter; I even remember her stepping up to work the register once or twice while her cashier was outside having a cigarette or changing the syrup on the pop dispenser or something. Her little son used to be there, playing in the aisles, usually running a dust butler back and forth over the little three-by-five throw rug that they had in front of the door during the damp winter months. She may have been there on Christmas day once, when we stopped in after our trip to the cemetery to visit Little Quinn. His cemetery is across the street from the 7-11; the 7-11 is four or five blocks up from the library; the library is directly across the street from our church; our church is one block from the teevee studio where she died. Small, small world.

Now, it's not like Aasiyah Hasani and I were friends or anything; any conversation we ever had amounted to "$3.35 please," "Here you go," "Thank you, here's your receipt." But I do remember thinking that she was a strikingly lovely woman, that her little boy was a cute little tyke, and...well, that's about it. And now she's dead and her husband is the prime suspect, having already been arrested and charged.

A couple of years ago we stopped in at 7-11 and saw a sign on the door reading "New Management". I assume that's about when Aasiyah sold her franchise in order to launch the teevee venture. Since I didn't figure this out until today, we haven't been back to 7-11 since the murder. Lately we've been going to another convenience store, anyway, because The Daughter likes the selection of bottled pop there better. But we still go to 7-11 maybe once a month.

It's all very sad.
scrawled here by Kelly Sedinger at 7:31 PM

Who are we to say that killing hundreds of people every month in the name of Allah is the height of evil? That is just their culture and ideology and it MUST be respected. Morality is all relative, we must remember that.

http://www.thereligionofpeace.com/
.
absurd thought -
God of the Universe says
cut off your wife's head

if she dishonors you
by asking for a divorce

.
absurd thought -
God of the Universe wants
all planets Islamic

Earth is one of many
in process of conversion

.
absurd thought -
God of the Universe wants
many Taliban planets

.
absurd thought –
God of the Universe says
convert the infidels