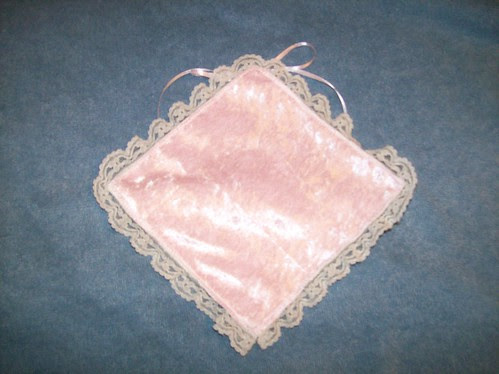 The Wife has always counted sewing as one of her passions, and she is damned good at it; she manages to create articles of clothing for herself and The Daughter that are frankly often better than store-bought stuff. I've always been impressed by this skill of hers; a few hours of fabric cutting and the whirring of the Bernina and out comes a blouse or a pair of pants.

Lately she's adopted a new project, which she is donating to several local hospitals. She calls them "Angel Wraps", and they are meant for premature infants who die. When we lost Baby Fiona last year, they wrapped her in a generic blanket that was too large for her tiny (22 weeks) body; how much nicer if she could have been in something like this. It may seem odd, but this kind of thing is meaningful to those of us who have been through something like this.

I have a couple more photos of these on my Flickr photostream.

What a lovely thing for her to do. I had a friend who lost her son when she gave birth to him at 26 weeks. I know she would have appreciated something like this. There are so many other women who will, too. I think your wife is just wonderful to do this!

As a fellow parent who lost a baby I also would of appreciated something so thoughtful.What a kind thing to do! Michele J

they are beautiful!
where i work we have similar items as well as keepsake gowns that are made by awesome folks who understand the need to make a memory even the hardest of times as in the loss of an infant...no matter how small.
god bless your wife. i pray it is a little healing for her. i know my vocation helps my own healing even 18 years later.

I have a couple friends who would have really appreciated something like this. It's a beautiful idea.