Mad Cooking Skills: I have 'em

Our Easter dinner this year was slightly untraditional, but it's the best thing I make, and it's been a long time since I posted the recipe here (way back when), so here it is: Pastitsio, the Greek fore-runner of lasagna. (Not that my recipe is somehow authentic Greek.) 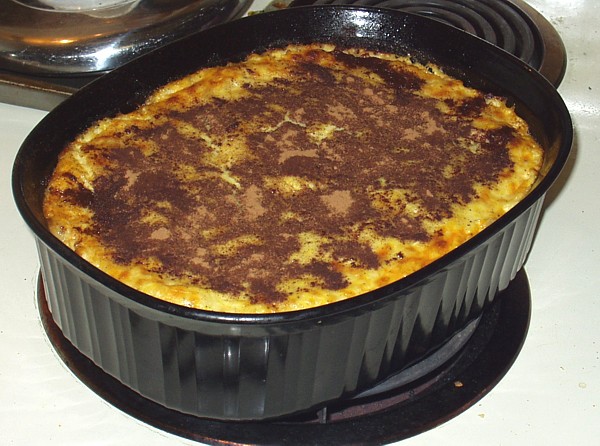 Cook 1.5 cups of elbow macaroni, and drain. Toss with a mixture of 1/3 cup grated parmesan cheese, 1/3 cup milk, and 1 beaten egg. Set aside until ready for assembly of the dish.

Beat one egg; set aside. In a heavy stovetop pan (Dutch oven or something similar), 1 lb ground meat (I usually use beef or pork, but I have used bulk pork sausage before -- if you use a seasoned meat, go easy on the salt later on), 1 onion and a couple tablespoons chopped garlic (to taste, really) until the meat is browned. Add 1 small can tomato sauce, 1/4 cup red wine (whatever's on hand -- I've made this dish using red wine from Cabernet to Port), salt & pepper (1 tsp each), 1 tbs parsley flakes, 1 tbs oregano, and 1 tbs ground cinnamon. (Generally I put in a bit more oregano and cinnamon; these are to taste.) Stir, bring to boil, and then simmer for ten minutes or so, until the meat mixture is quite thick. At that time, remove from heat and slowly stir the beaten egg into the meat mixture. This will thicken it even more.

White Sauce for the Top

Beat two eggs, set aside. In a saucepan, melt 3 tbs butter or margarine; add 3 tbs flour to make a roux. Then add 1 1/2 cups of milk, all at once, and ground pepper to taste. (I use quite a bit.) Stir constantly, breaking up any lumps in the roux, over fairly high heat. You want this to come just about to a boil, because a roux thickens best at a boil. When the mixture is pretty thick, temper the eggs by spooning 1/4 cup or so of the sauce into them; then slowly pour the egg-and-sauce mixture back into the pan with the rest of the sauce, stirring along the way. This will thicken it even more. Then stir in 1/3 cup grated parmesan cheese.

Lightly grease, butter, or spray with cooking spray a 1.5 qt casserole dish. Assemble the layers as follows: 1/2 of the macaroni mixture, then all of the meat mixture, then the remaining macaroni mixture, and finally top with the white sauce. Sprinkle the sauce with more ground cinnamon to taste (I absolutely blanket the thing, because we adore cinnamon) and then bake in a 375 degree oven until the top is nicely browned. Remove from oven and let stand for several minutes before cutting and serving.

How it looks in the serving: 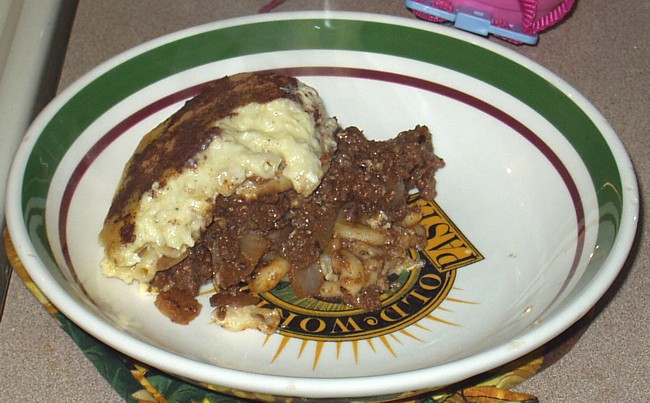 It's not hard to make, although it is time-consuming. So start cooking, folks!