I suspect this isn't uncommon, but we have a logistical problem here at Casa Jaquandor on holidays which involve the visitation of our home by, shall we say, mythical beings who impart gifts and/or sweet edible items upon The Daughter. The problem is this: on such holidays, The Daughter tends to get up ridiculously early, which means that she inevitably discovers what Santa or the Easter Bunny have been up to.

Now, on Christmas morning, this isn't that big a deal, since we get the gifts out on Christmas Eve after she has finally fallen asleep. But our Easter ritual is a bit more involved, owing to the existence of the Easter eggs. See, in addition to leaving a basket of goodies and a gift or two (this year, a stuffed animal and a jigsaw puzzle of Captain Jack Sparrow), our Easter bunny takes our colored eggs out of the fridge and hides them throughout Casa Jaquandor, requiring The Daughter to hide them.

Obviously we can't hide eggs at night, because you can't leave food out at non-refrigerated temperatures for that many consecutive hours. So the plan is always for us to get up before The Daughter gets up, and hide the eggs before she rises. Clearly, this plan tends to usually result in failure because she's always up first, so our notion has been to posit that our Easter bunny comes while we're attending our Easter morning church services. How does this work? Well, The Wife comes up with a rationale for lollygagging behind while The Daughter and I head out to the car: usually something like "Oh, I forgot that bag of stuff we're donating, I'll be right down." Leaving the eggs out for two hours isn't disastrous, even if it's not the best food handling practice under the sun. OK then...

...except that this morning, I had forgotten to re-hide the jigsaw puzzle, so The Daughter found it and realized that the Easter bunny had been here, but also had not hidden the eggs as he was supposed to do. After a hasty conference with The Wife, we decided that our cover story would be that The Daughter had, in getting up early, startled the Easter Bunny before he could complete his task of hiding the eggs. Luckily, she bought this idea, and we executed things as we usually do: The Daughter and I headed for the car while The Wife lagged behind because she'd forgotten something. The Daughter never suspected. Heh, heh heh! And thus we went off to church, leaving the eggs safely scattered 'round the apartment for searching two hours later.

On the way to church, The Wife whispered something fateful in my ear: "I hope the cats don't play with the eggs."

"You mean," whispers I in return, "you didn't place the eggs in such a way that they couldn't get at them?"

"I only had three minutes to think this whole thing through!"

So, two hours later, we get home, and show The Daughter that the Easter Bunny has, in fact, come back and hid eggs all over the place. She gleefully starts searching them out. At one point, she's in another room, when The Wife, standing over the recliner, mutters, "Yeah...there was an egg here."

That egg turned up on the floor by the computer table, intact but clearly not in its original spot. Now, not every egg fell beneath the claws of the mischievous felines, but about eight or nine of them were a bit harder to find than they should have been, and one of them almost completely eluded us. We couldn't find that one egg anywhere. The Daughter looked everywhere, and we even used this as an excuse to get her to clean up a large pile of Daughter-related detritus that occupies a semi-permanent spot in our apartment, under the guise of "searching for the lost egg". But still, no egg.

Until, half an hour later, The Daughter spots the egg, right here: 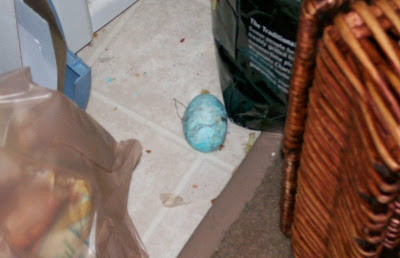 That's the garbage can and the big bag of charcoal in our kitchen; note the blue egg on the floor. And upon picking up the egg, we discover that it's not nicely intact as were its brethren. No, this egg was wickedly cracked, and covered with cat hair and dust. Clearly this egg bore the brunt of the kitties' hours of fun. Here's the poor egg, at the end of its eggly journey: 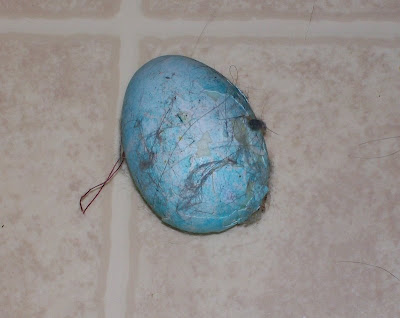 The moral of the story is clear: Cats are the embodiment of destructive evil.
scrawled here by Kelly Sedinger at 8:53 PM

I have never been quite sure about the specific responsibilities of the Easter Bunny regarding the eggs. We color the eggs together with our son and then we just keep them in the fridge. He knows that a bunny wont lay an egg, and if the Easter Bunny did lay an egg, it'd probably be pretty big.

The snack left out for E. Bunny - and a note from same on the snack plate in the morning seems to cover the issue. My boy isn't sweating the details about all this, as long as the Easter Bunny leaves a basket o' goodies.

The Easter Egg hunt is actually a candy hunt with goodies hidden by Mom, Dad, Aunts or whomever.

Once they get the idea that the E. Bunny may be fictional, they'll still let it ride because it seems to work out pretty well. I'm pretty sure your only supposed to get candy if you don't ask too many questions. I still get a basket - I don't ask. I know its not my wife leaving the basket of candy, because she insists I eat far too much sugar & sweets (she is correct about that).

Also, we don't do any pre-event hiding of goodies as we have a dog, who did manage to find and gulp down a couple of pounds of chocolate on Wednesday (apparently, the E. Bunny had a boatload of Watsons chocolate hidden in a bag on the floor of my wifes closet). Luckily, the dog threw it all up post haste. She was visibly bloated from chocolate. Chocolate can be pretty unhealthy (potentially fatal, actually) for dogs - so I'm glad she purged and now seems to be alright. Wednesday night was not fun as I had a hyper-to-begin-with Jack Russell Terrier on a sugar and caffiene high-crying, barking and puking.