So here we go again. I suppose I should just give up the game as to Unidentified Earth 29, which has stubbornly defied Identification. However, upon checking out the same location on another aerial image site, I'm wondering if my original image was taken before the monument in question was even constructed, because it now looks to me like the thing wasn't even there. I'm talking about the major attraction of Monroe, OH: the Giant Jesus Statue. Here, for comparison, is the new photo I found: 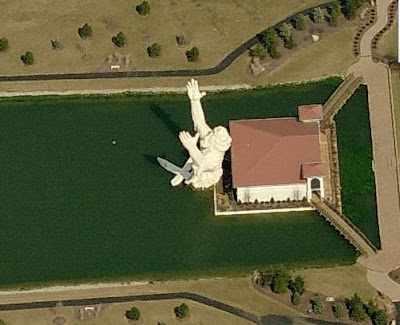 So I may have inadvertently played unfair on that one.

However, I'm not giving up the game yet on Installment 30. Somebody's got to be a fan of the teevee show that (supposedly) takes place in that building!

But all is not lost! Last week's installment was identified with no hints from me whatsoever! Steph Waller nailed it: we're looking at Tintagel Castle, the legendary home of Duke Gorlois of Cornwall, and birthplace of Arthur Pendragon, and a key location in The Promised King. Hooray!

And now for the newest entry. 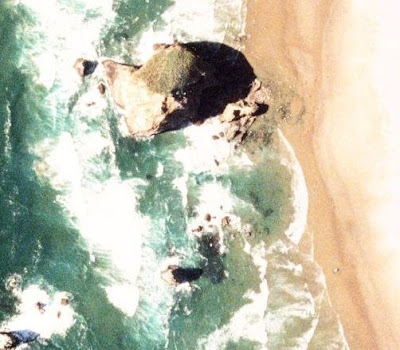 Where are we? Rot-13 your guesses, folks!
scrawled here by Kelly Sedinger at 8:24 PM

At last, I got one... with years of literary help from Marion Zimmer Bradley, Geoffrey of Monmouth and Thomas Mallory!

Grrrr, beat to the buzzer... I knew this one too.