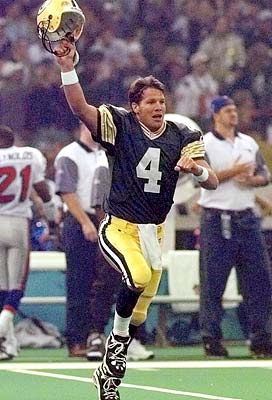 I don't think that at any point in the last seventeen years I would have named Brett Favre as my favorite football player, but he would have certainly made the cut if I'd ever been asked to name my ten favorite players. That photo above is why: Favre always played with a greater feeling of joy. He always looked like what he was: a guy playing a game. Sure, many times he would try some kind of goofy thing that would only be attempted by a kid in a sandlot game of touch football, and many times those gonzo plays of his would turn into interceptions or turnovers, but...Favre was always fun to watch. I like that. There are lots of QBs who are interesting to watch, or admirable to watch based on their pure skill and mechanics, but Favre made the game fun to watch. You always knew that you were going to see something when he was on the field.

I'm surprised that he decided to retire now, especially seeing as how he seemed to find rejuvenation last year and since he's as fierce a competitor as they come, and with him retiring now, that means that his final pass attempt in the NFL was an interception in overtime of the NFC Championship Game, with the resulting drive seeing the Giants score the points to win and go to the Super Bowl. But still...so long, Brett Favre. 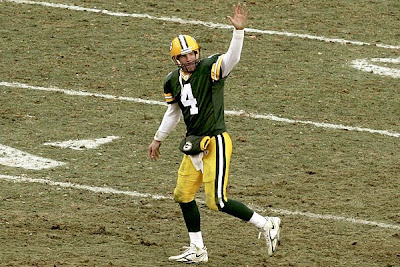 I think Favre was likable to so many of us because we envision him as what we would look like were we to be blessed with his skills and talents.

Having fun, likable, normal, beset with problems,never taking the situation for granted.

And a hot wife. But all have one of those anyways...