What are these "playoffs" of which you speak?

From my vantage point as a Buffalo sports fan, I've accustomed myself to the grand old idea that it matters not whether you win or lose, but rather how you play the game. This has made slightly more palatable the reality that Buffalo sports teams, over the last half-decade, have tended to lose. A lot.

But now the Buffalo Sabres, a squad of men who routinely engage in something called "Hockey" in a national league of some sort, have uncovered a heretofore unrealized reality: that if you don't suck, and if you do play the game well enough to win quite a bit more than you lose, then, by Golly, you get one of a limited number of invitations to play some more games, after the scheduled end of the "regular season". And as long as you keep winning, you get to keep playing! And if you win enough until there's nobody left to beat, well, they give you an oversized drinking vessel made of silver and they engrave all your names on it and everybody basically dances into the streets with glee. 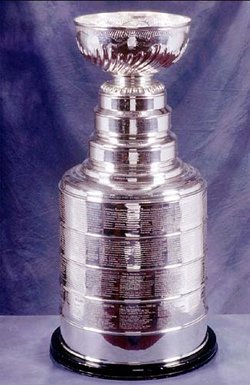 (The Sabres won Game One of their playoff series against Philadelphia last night, by the way. 3-2, in double OT. Game on!)
scrawled here by Kelly Sedinger at 3:50 PM