Traffic jams will be a thing of the past!

Over at City Comforts, David Sucher has been focusing a lot on a Seattle issue: what to do about the "Alaskan Way Viaduct". This is an elevated expressway in downtown Seattle that runs right along that city's waterfront. According to the Wikipedia article linked previously, the Viaduct has become an object of concern because of the threat of earthquakes in the Pacific Northwest, especially following the collapse of the similar double-decker expressway in the Bay Area in 1989's major earthquake. I did some noodling about with Google Maps, and I was able to capture this bird's-eye view of the Viaduct: 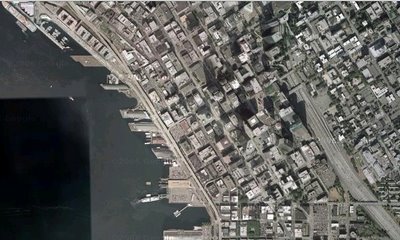 Looking at that photo, I was strongly reminded of something. And I hope that my Buffalo readers are reminded of the same thing: our own Interstate 190, which is also an elevated expressway in our downtown that runs right along the waterfront. Apparently a number of Seattlites are of the view that in addition to being unsafe in earthquakes, the Viaduct also cuts off easy access to the city's waterfront, which is an oft-made complaint about I-190 in Buffalo. Here's the bird's-eye view of the 190: 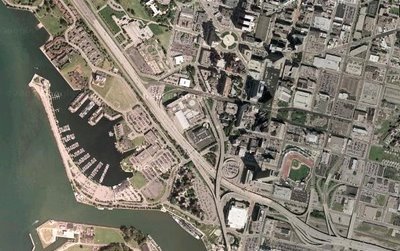 This is not to suggest, of course, that Seattle and Buffalo are in similar positions, since Seattle actually has an economy and Buffalo would sure like to get one of those someday iffen' we can get the nice folks in Albany to remember that we exist way out here, but still, it's heartening to know that the same kinds of issues exist elsewhere.
scrawled here by Kelly Sedinger at 7:35 PM