See, this here is where we type stuff.

Sorry about the long delay between postings, Gentle Readers! Yesterday was a day of domestic goodness (laundry, grocery shopping, going to the library, etc.), and Friday was -- well, I just didn't have much to say on Friday.

We just got back from an outing to the Tifft Nature Preserve, which is one of those free-to-attend treasures that nobody seems to know exists around here. It was a great time; we took a picnic lunch and then spent a couple of hours wandering the trails, covering only about half of them. I'll have pictures up on Flickr either later today or tomorrow evening (more likely tomorrow evening), but until then, here's a tree that we passed on the way out and found particularly striking: 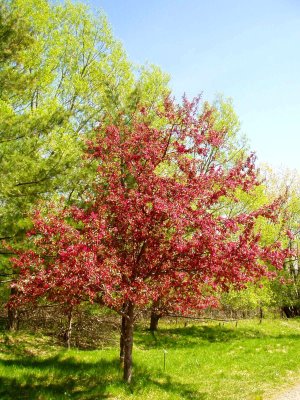 What's especially amazing about the Tifft Preserve is that it's almost literally in the shadow of downtown Buffalo: from certain places within its boundary, one can see the HSBC Tower looming. The natural environment and the built environment don't have to be seen always as diametrical opposites.
scrawled here by Kelly Sedinger at 3:52 PM