I guess eternal vigilance doesn't buy as much as it used to....

It looks like the Republicans are starting to amp up their tried-and-true "terrorist bogeyman" electoral strategy. Senator Pat Roberts, Republican of Kansas, responded to fears that the prosecution of the "War on Terror" is usurping civil liberties:

"I am a strong supporter of the First Amendment, the Fourth Amendment and civil liberties," Senator Pat Roberts (R-Kansas) remarked at yesterday's Hayden confirmation hearings, "but you have no civil liberties if you are dead." (emphasis added)

So here we go again: be afraid. Don't think twice about giving up your civil liberties, because if you don't you might end up dead dead dead dead!

Matthew Yglesias has a pretty good rejoinder to talk like this. I'm frankly disgusted by this kind of rhetoric. It's disrespectful of the sacrifice made by the men and women who died in all those wars from the Revolution to now, and we have civil liberties in the first place precisely because of the deaths of those people. I suppose that Senator Roberts and his ilk think that the thing these people died for is just some quaint notion: 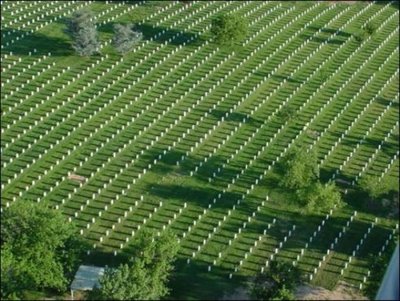 Remember, this is the party that has made its unoffical anthem that song by Lee Greenwood. Guess they'll have to change the lyrics a bit:

And I’m proud to be an American,
where at least I know I’m free I'll get my freedoms back when all the terrorists are dead.

And I won't I'll conveniently forget the men who died,
who [temporarily] gave that right to me.

And I gladly stand up cower,
next to you beneath my bed and defend her still today not question anything the President says.
‘Cause there ain’t no doubt I love this land,
God bless the USA.

Yeah, 9-11 changed everything, all right.