"You do remind me a little of Hooch." 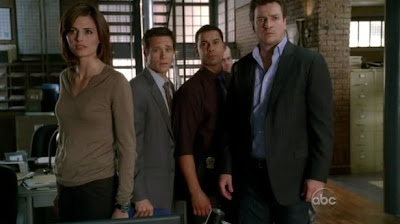 I can rarely say with any particular conviction that a single teevee show is my favorite teevee show at any one moment, because there are always a number of teevee shows that I like a lot at any one time, and I can rarely elevate a single one to "favorite" status. Right now, my favorites are Grey's Anatomy, The Mentalist, 30Rock, and a couple of others. One is starting to show signs of pushing through into possible "favorite" status. That show is Castle. 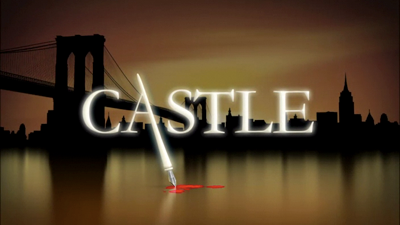 For those of you who haven't watched Castle -- what the hell is stopping you?! -- it's a mystery series set in New York City. Now, I know, we've had lots of those, but the gimmick here is that a bestselling murder mystery writer named Richard Castle (Nathan Fillion) uses his friendship with the Mayor to get the NYPD to allow him to "consult" on murder cases, which means he gets to show up at crime scenes and be present for interrogations. His "partner" is Detective Kate Beckett (Stana Katic), who is very tough, competent, professional, no-nonsense. Castle tends to be goofy to the point where he actually seems to have fun at bloody crime scenes, and it's constantly falling to Beckett to rein him back in. It's your typical relationship of two people of completely different personalities being pushed together, and as in all such cases, it either works or it doesn't on the strength of the writing and the chemistry between the actors. Well, Castle has a surplus of terrific writing, and Fillion and Katic have so much chemistry that one wonders if Union Carbide is sponsoring the show.

Here's a generally random list of things I appreciate about Castle:

:: Obviously, the Castle-Beckett relationship is the cornerstone of the series, which wouldn't work without it. It's a pleasingly complex relationship, and not without a certain amount of romantic tension between the two. And that's the important thing to note: this isn't sexual tension of the "Will Maddy ever sleep with Dave!" sort, but genuine romantic tension. There's really no doubting that Castle and Beckett are really made for one another, just as Mulder and Scully were really made for one another.

Will they end up together? Maybe, maybe not. Maybe the show ends with them getting together, or maybe the show ends at some point aiming in that direction. What can not happen is either Castle or Beckett ending up with someone else. That would be wrong.

:: Castle makes a lot of sly references to other teevee shows, and generally has a great time winking at the audience. In one episode, an FBI agent asks Castle if he thinks he's some kind of "TV detective", to which Castle responds, "I don't think so. They always seem oddly fixated on their sunglasses."

And course, there was the episode that started off thusly:

And then there was this bit, which would only be noticed by the really attentive fans of Firefly:

:: Castle is a wonderfully shot series. Episodes are full of bold colors, artfully designed sets and shots, interesting camera work. It's nice to see a crime series set in NYC that doesn't emphasize the gritty, dirty New York. It doesn't make New York into a fairytale land of beauty the way, say, Beauty and the Beast did back in the day, but it's not a NYPDBLue-esque tour of filthy bodegas and scummy bars, either.

:: Snappy dialog and great lines abound. In one episode, a guy avoids being killed when he's shot because the bullet is stopped by the copy of Crime and Punishment that he's got in his coat pocket. One of the detectives later quips, "Good thing he likes Russian literature. If he's a Nicholas Sparks fan, he'd be dead right now."

Or another episode in which Castle and Beckett are investigating one case while the other two detectives investigate another, and Castle has bets going with the other two as to which team will close their case first. They all keep the betting "hush hush" because they know Beckett will ream the out in a big way if she finds out about it. Which, of course, she eventually does. Her response? She glares at the three of them, and then says, with perfect comic timing, "One hundred bucks on me and Castle."

:: Castle's family life isn't irritating at all. A lot of times shows like this stop dead in their tracks when they show the "civilian lives" of the characters. Castle's family -- he lives with his eccentric stage-actress mother and his turning-out-just-fine teenage daughter -- often keep him in line and are interesting characters in their own right. I just hope that we don't get some kind of imperilization for Castle's family sometime down the road, though.

The flipside here is that Detective Beckett's home life isn't shown nearly as much. We know that she reads Castle's books, and her main motivation for becoming a cop was the unsolved murder of her mother. But we don't see nearly as much of what she does on her off-hours as we do of Castle's (which makes sense, since the show is mainly from Castle's point of view).

:: The supporting characters are quirky and intelligent on their own. Nobody on this series is a boring "stock character".

:: There's a small bit of ongoing story arc in the series (Detective Beckett's mother's murder), but that's kept fairly solidly in the background except for an episode here and there. The soap opera stuff is kept to a minimum. I love some ongoing continuity in a teevee series as much as anybody, but it's also refreshing to have a show where most of the time, episodes are pretty self-contained.

Now, the show's not perfect. No show ever is. There was an episode, for instance, that had Alyssa Milano guest-starring that was pretty clunky, mainly because after a season-and-a-half of getting to know Richard Castle, there's just no way to see Alyssa Milano as the one failed relationship Castle really regrets. And there are lots of ways the show can misstep in the future: rushing the Castle/Beckett relationship, or putting Castle's family in danger, so on and so forth. But for right now, Castle is a weekly dose of smart and witty murder mystery.
scrawled here by Kelly Sedinger at 10:20 AM

I fought my enjoyment of this series for a long time. I was reluctant to follow Nathan Fillion down another dark path to cancellation.

I mean, I love the guy. He is my favorite cowboy hero who always does the right thing in the end but gets beat up for that decision. However, regardless of how infinitely watchable he is, he has never been a part of a series that lasted more than a couple of seasons.

He was my first choice to play Green Latern in the big screen movie. Have you ever seen the fan film they made using clips from 'Firefly'? It's awesome.

Then somehow, against all efforts to the contrary, he found Castle. He is perfect in that role and that shows no more so than this year when Becket has another stallion sniffin' around the padock. He's hurt and jealous and reacts like a little boy who is used to getting everything he wanted. It's brilliant character development and shows that regardless of people saying they want the two leads to get together - it will be the DEATH of this series. It always is. I don't need to sight 'Moonlighting' or 'The Adventures of Lois and Clarke', do I?

I also like his home life. His daughter is smart and sweet like he is. The one time she was in any 'danger' whatsoever was because of her friend. It's so nice that they don't feel the need to make him face crap while not solving crimes which would seep into his and Beckett's relationship. Each episode is like a clean slate and if you have never seen the show - one episode is all you need to catch up.

The side characters don't get in the way and are always good sources for comedy like last week when the three guys were discussing shaving cream like women talk shoes. Suddenly Beckett was the most macho person in the room.

Speaking of Bekett. How great is her performance that I actually forget that she is the most beautiful and least likely to be a detective actress EVER. I never think that anymore. She is Kate, she is pretty and she carries a gun and solves crimes. I get it.

Monday is also the perfect day for a show like this. A combination of all the stars coming together to produce something great.

I love that show, too.
That Firefly cameo was certainly a favourite moment. The duo episodes with the red-haired FBI detective (the one with the gadgets) and that explosion was my favourite, I think. I like Castle's family but I also really like how funny (yet solid, efficient) Ryan and Esposito are.

A good evaluation of the show too -- good points and bad points. Good job rounding it up.

I love Castle for all the reasons you said. I like the family scenes every bit as well as the police work scenes. I am so glad they didn't do the usual bratty kid and grouchy parent sort of thing that most shows do.