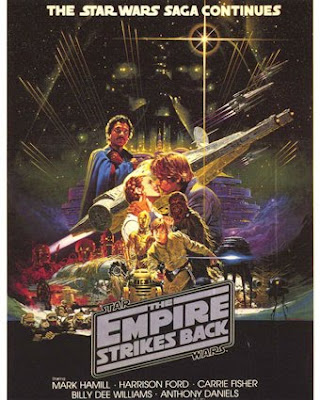 So, thirty years have passed since the release of Star Wars Episode V: The Empire Strikes Back. Wow, I guess. As luck would have it, I watched the film not too long ago -- a couple of months, probably -- and it still holds up extremely well. This is unsurprising, of course; the film is a bona fide classic.

I've read some tributes here and there around the Interweb and around Blogistan specifically, and I've found myself of mixed mind about the good words being said about the movie, mainly because a very large portion of comment seems to be of the "Wow, remember thirty years ago when Star Wars didn't suck?" variety. I'm saddened by that, but hey, nothing I can do about it, either. It gets tiring, though -- it seems that every event or happening or milestone that returns Star Wars to public consciousness is followed by the usual "George Lucas is the richest hack in history" comment. Oh well. Par for the course. Put it this way: I'm not much looking forward to 2013's 30th anniversary of Return of the Jedi. 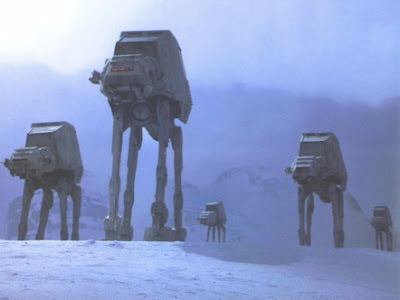 Empire came out when I was just eight years old, living in Hillsboro, OR. I didn't see it for a few weeks after it came out, and yet, in those pre-Interweb days, I was able to go see the sequel to Star Wars three or four weeks after its release with zero idea of its story, other than what I'd seen in the TV commercials and such. I knew there was a snowy planet where the Rebels were fighting these big metal dinosaurs, I knew that there was a space chase through some asteroids, and I knew that there was a new character played by some guy named Billy Dee. That's about it. I certainly had no idea that there was a Jedi master named Yoda, and I was actually surprised when the goofy little green guy in the swamp turned out to be Yoda. I was horribly dismayed when Han Solo got put into carbon freeze, but I thought, "Hey, no prob, they'll save him before the movie ends." Yeah...my first ever experience with a cliffhanger.

And I had no idea whatsoever that Darth Vader might be Luke Skywalker's father.

How was this possible? Well, again, it was pre-Interweb, and pre-cable teevee, and all the rest of that. Also, I was lucky that my school district at the time let out for summer vacation in the first days of June, so Empire had been out for all of two weeks before I lost most contact with my schoolmates, most of whom hadn't yet seen the movie either. So there was nobody to spoil the thing for me. I went into that movie almost completely blind. Empire was the last Star Wars film I was able to do that with. 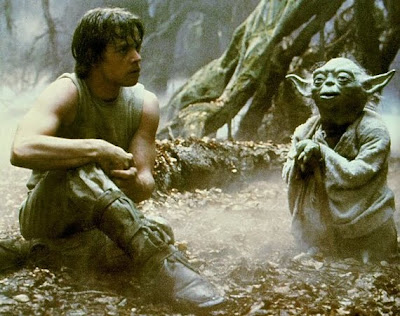 Empire is, of course, now nearly universally hailed as the best of all Star Wars movies. There's a lot to that, to be honest; the film earns its reputation with a superb script, amazingly paced and shot action sequences, a darker turn of events, and what may well be the best music John Williams has ever written. When pressed, I will almost always name A New Hope as my personal favorite Star Wars film, but the pro-Empire arguments are compelling.

Empire's beloved status really only started to grow after Return of the Jedi came out three years later. I don't think it's so much because Jedi was a bad film, as much as Empire's nature -- being the middle act of a three-act story -- meant that it could only really be appreciated once all the acts were out there, and the middle act's true function and relation to the rest of the story could be judged. If I preferred Empire when I was a kid, it was mainly because it was shinier and newer than the older, more familiar film.

Here, in tribute, are my two favorite tracks from the entire brilliant score to The Empire Strikes Back. Empire was the first record album I ever bought with my own money. I didn't even have my own record player at the time, and I had to listen to it in my parents' bedroom when I wanted to hear it. I'd later get a record player that Christmas (it also had an 8-track tape player!), and Empire was the first thing I played on it. I played that album (a 2-LP set) to death over the next few years, wearing out the gatefold record jacket and putting numerous pops and scratches into the LP's grooves themselves. Back then, John Williams would arrange his albums to make a "better listening experience", which meant that tracks were not arranged on the album in the order they were heard in the film and that tracks from entirely different parts of the film were sometimes combined into a single track on the album. I played that album so much that even now, when I listen to subsequent remasterings of the Empire score, with all the tracks in film order, my brain still expects the original album order, with its tracks bearing titles like "The Heroics of Luke and Han".

The first track is my favorite action cue from the score. Many fans would cite "The Asteroid Field" as theirs, but for me, it's "The Clash of Lightsabers" all the way. This track underscores the second part of Luke's duel with Vader, after they've moved from the carbon freezing chamber to a mechanical anteroom where Vader starts using the Force to hurl machine parts at Luke. It begins mysteriously and becomes more and more ominous as Vader toys with Luke; the music howls when the big window behind Luke is shattered and the wind begins to pour through the room, sweeping Luke out into the shaft, where he manages to catch onto the gantry and pull himself to safety. Then we cut (at the 1:38 mark) to Leia, Chewie, Lando and the droids as they work their way back to the Millennium Falcon. Lando's theme (at the 2:00 mark) plays as he announces the evacuation of Cloud City. The rest of the track builds and builds (love the great brass bit starting at 2:36) which ends in first triumph as R2-D2 opens the door to the landing platform, and then the desperate version of the film's Love Theme as the heroes race for their ship and freedom. This is one of my favorite action cues in all film music.

Second is from earlier in the film, on Dagobah: "Yoda and the Force". This scene is, for me, the philosophical and emotional heart of just about all of Star Wars, when Yoda takes advantage of the sinking of Luke's X-wing into the swamp to try to get through to Luke as to what it truly means to feel the Force. It's a wonderful cue, from the meditative string writing to the noble statement of Yoda's Theme as he lifts the ship from the water.