For English speakers with subpar Chinese skills, daily life in China offers a confounding array of choices. At banks, there are machines for “cash withdrawing” and “cash recycling.” The menus of local restaurants might present such delectables as “fried enema,” “monolithic tree mushroom stem squid” and a mysterious thirst-quencher known as “The Jew’s Ear Juice.”

Those who have had a bit too much monolithic tree mushroom stem squid could find themselves requiring roomier attire: extra-large sizes sometimes come in “fatso” or “lard bucket” categories. These and other fashions can be had at the clothing chain known as Scat.

Go ahead and snicker, although by last Saturday’s opening of the Expo 2010 in Shanghai, drawing more than 70 million visitors over its six-month run, these and other uniquely Chinese maladaptations of the English language were supposed to have been largely excised.

Well, that at least is what the Shanghai Commission for the Management of Language Use has been trying to accomplish during the past two years.

Fortified by an army of 600 volunteers and a politburo of adroit English speakers, the commission has fixed more than 10,000 public signs (farewell “Teliot” and “urine district”), rewritten English-language historical placards and helped hundreds of restaurants recast offerings.

There's a photo gallery of hilariously mistranslated Chinese signage as well. This one nearly had me spewing coffee all over my laptop: 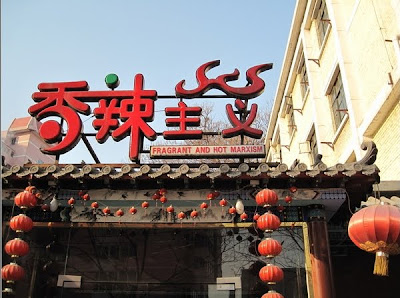 I mean, who wouldn't want their Marxism hot and fragrant!
scrawled here by Kelly Sedinger at 12:16 PM