What am embarrassing gaffe that whole "Air Force One flying over New York City" thing turned out to be, huh? And how avoidable -- they could have just put out a news release on the thing, say, a week before, letting New Yorker know what was going on. If that had been the case, I'll bet a lot of people would have been excitedly looking for the plane, instead of looking up and thinking, "OMG a plane where there shouldn't be one! AIEEE!" Because, you know, New Yorkers have reason to be a bit skittish on looking up and seeing planes where they don't usually see them. So, on balance, a big "Oops" on the White House on this one. At least the guy responsible resigned, and hey, the resulting photo is actually very nice: 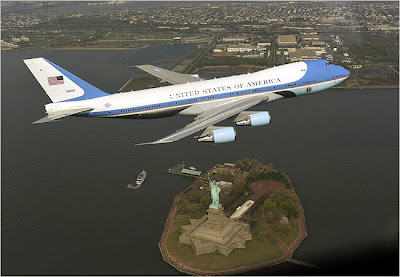 I've mentioned this before, I'm sure, but back in 2004 President Bush was coming to Buffalo to give a speech or take part in a town hall or something like that. On the morning he arrived, I just happened to be in the parking lot at The Store when I heard an airplane overhead. This is not unusual, since The Store is about ten miles, as the plane flies, from Buffalo Niagara International Airport, which means that planes are usually visible and quite low at that from our parking lot. But this one was even lower than usual, and it was coming from a different path than most commercial planes take over The Store. It took me a few seconds of watching that plane before I recognized it as Air Force One. There's something thrilling about seeing that plane in flight. I'll bet New Yorkers wouldn't have minded, if someone had simply said, "Hey, we're gonna fly low over your city so we can take some new pix of the plane. Everybody OK with that?"
scrawled here by Kelly Sedinger at 6:47 AM

I was wondering if the main reason it wasn't publicized ahead of time was to prevent lunatics from trying to take it out. Then again, I imagine there's a much greater danger of that when the President is inside on his way to an engagement.

I am sure if this happened while President Bush was in office the media would have been as forgiving and congenial in embracing the gaff as a silly mistake has they were with President Obama.

I used to see Air Force One when it came into Point Mugu in Ventura County back in the 80s. Reagan often flew in there to go to his ranch in Santa Barbara. You're right. There is a certain thrill at seeing it.

Colbert was right; haven't they ever heard of Photoshop?