Continuing my look at each of the Statehood Quarters, we turn our attention to the South and Southwest. Yay!

I like what they do here, although I think it would work better as an action picture rather than a staid view of a horse just standing there; plus, the mansion in the background makes the image a little too busy for my tastes. I think a jockey riding a horse on a track might have been a better way to go. The motto, "My Old Kentucky Home", is presented in quotes, which I find interesting. 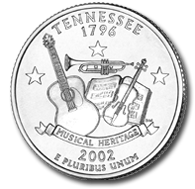 Another of my favorites, honoring Memphis's jazz scene and Nashville's importance to country music. It's a simple design, with three instruments and a music score, and the symmetry is helped by aiming the guitar and fiddle in opposite directions. This is a very nice quarter. 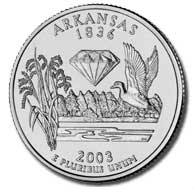 Here's a bit of design-by-committee that works OK, but not terrifically well. As usual, too many elements make for too busy a quarter, but at least the design elements are arranged in a way that's not too confusing. You've got a flowing river (the Mississippi, I assume), a waterfowl in flight, some kind of crop, and a diamond in honor of the fact that Arkansas has a diamond mine. As the design-by-committee quarters go, this isn't too bad, but it could have been better. 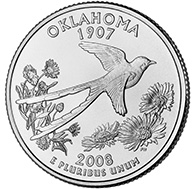 I have readers from Oklahoma, so let's end the suspense! It's terrible.

Actually, I'm kidding. Oklahoma proves, once again, that simplicity can work wonders. They give a bird (the state bird, actually, the Scissortail Flycatcher) in flight over two flowers (one of which is the state wildflower, called "Indian Blanket"), and that's it. It's a beautiful coin. 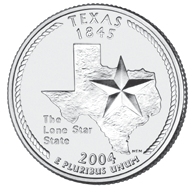 I'm conflicted about this quarter, which makes sense, since I'm often conflicted about Texas itself. The design here is so blindingly obvious that it makes me almost crazy. The whole "Lone Star" thing is almost a cliché by this point, and I'd have really hoped that Texas would do something different, and yet, that's what they did: the Lone Star yet again. Yeah, we get it. Lone Star. Texas. Gotcha. And yet, this is a really nicely done design. The state outline is done in textured relief, and the Lone Star is also textured. But the best part of this quarter, for me, is the border, which is done with a lasso rope. So, Texas did something very nice with a really boring Texas trope. 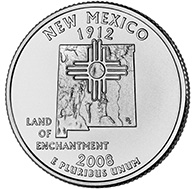 This would be almost perfect if they hadn't marred it with the off-center inscription "Land of Enchantment". The relief map of New Mexico with the Navajo symbol above it is terrific. I like this quarter a lot. Nicely done, NM! 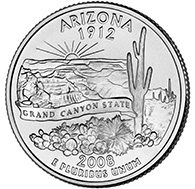 Another very beautiful design, my only quibble being that it renders a bit hard-to-make out on the actual coin. I really love how much detail they're able to get onto a coin, though; this is terribly impressive, which makes some of the other quarters look dowdy by comparison. Arizona did well here. 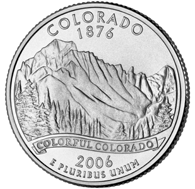 Here's yet another example of a fine quarter whose only downside is the addition of verbiage. The coin already makes clear that we're looking at Colorado, so why they felt the need to also have the coin say "Colorful Colorado" is beyond me. I like the mountain scene, though. 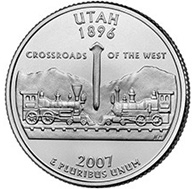 This is another of my favorites, even if we now have our third state that's identified itself as a crossroads; this time we're at the "Crossroads of the West". The coin pays tribute to the completion of the intercontinental railroad, with the final railroad spike ready to be driven, and the two locomotives facing opposite directions.

Next time: the Heartland and the northern Rockies.

I'm surprised. I don't like the Oklahoma quarter. But maybe that's because I know what the other finalist designs were. There was a website a couple of years ago where people could see the 10 finalists. All but two of them had something related to Oklahoma's Native American history. Some were better than others but that idea seemed appropriate to me. I am annoyed that they decided to go with the state bird and state flower design instead.

I love this series.

I agree, Tennessee is one of the best of the entire 50

I have to say I'm a big fan of the Texas quarter. If you've ever been in Texas much you'll notice that both the state outline and the star shape are EVERYWHERE (including their state "farm road" roadsigns, which are pretty neat). And since it's such a huge state with such diverse cultures and tastes, to do anything but would mean omitting someone or something.

It's interesting to me that these states are generally scoring higher than a lot of the eastern states. I realize it's a subjective score but you do base it on some objective criteria, meaning that there is a definite trend going on in these designs. Might these trends indicate deeper cultural traits as well? Hmm. You just know that somewhere some grad student is doing their sociology/anthropology thesis on this...