Prompted by this post by Snell, which I quoted in Sentential Links yesterday, I've been thinking a bit about one of the bigger misfires in Star Trek history. I'm thinking of Lieutenant Saavik. 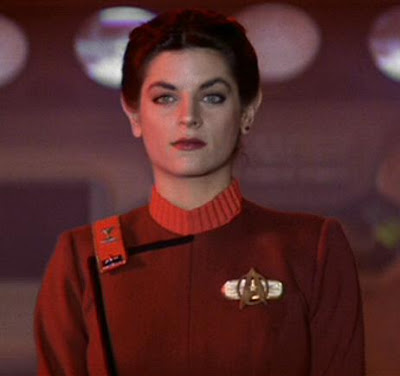 Saavik first appeared in STII: The Wrath of Khan, played by Kirstie Alley. (OK, I'll admit it, she was among my first celebrity crushes.) As TWoK opens, the Enterprise is no longer a flagship in the fleet, but is instead pretty much of a training vessel, being used to teach Starfleet cadets the ins-and-outs of being Starfleet officers. Saavik is the highest-profile of these youngsters whom we meet in the movie; as the film opens, she is taking the infamous Kobayashi Maru test, which turns out to be a test of character in judging how prospective command officers deal with no-win situations. (Saavik's resolution results in a ship blown to bits by Klingons.)

At first glance, we see that Saavik has the pointed ears of a Vulcan, but her actions throughout the film show that she isn't the cool, level-headed Vulcan we might expect from, say, Mr. Spock; in point of fact, Spock in the teevee series showed less emotion than Saavik does in TWoK. This is almost certainly due to Saavik's generally-accepted backstory: she is not pure Vulcan, but half-Vulcan and half-Romulan. This is never specified in the movies, but in the novelizations and in the original screenplay, so I think it can be taken pretty much as canon at this point.

There were occasionally new crew members to think about in the Trek movies, and Saavik was perhaps the most memorable. She is extremely intelligent, ambitious, and observant; however, she comes off as also deeply uncomfortable with herself and struggling to figure out just who she is and what her purpose may be. This represented a wonderful contrast with the remainder of the Enterprise crew, who by the time of TWoK were all experienced veterans who were so good at their jobs by now that it pretty much became necessary to make justifications for them being at their old posts after so many years. (Spock is now Captain of the Enterprise, supervising the training missions; Scotty is the trainer for the engineering cadets, Chekov is First Officer on Reliant, and it's generally accepted, as depicted in the novelization, that Sulu has just been promoted to Captain as well. As for Uhura, I'm not entirely sure.) Anyway, Saavik's career is just getting started. And she is in awe of Admiral James T. Kirk.

By the end of TWoK, Saavik has, interestingly enough, not been depicted as having reached some kind of definitive stopping point in her "growth" as a person. She's learned that Kirk isn't some unapproachable god but basically just a guy who screws up a lot and yet figures out ways through it all; she's been through an extremely difficult crisis; she's lost her mentor in Captain Spock. (And, according to the novelizations of TWoK and The Search for Spock, she has picked up a lover in David Marcus.)

When next we see Saavik, we're into TSfS and she is on board the science vessel Grissom, which has been dispatched to investigate the newly formed Genesis Planet, along with David Marcus (who is Kirk's son, for those not keeping score). But she is now no longer played by Kirstie Alley, but by Robin Curtis: 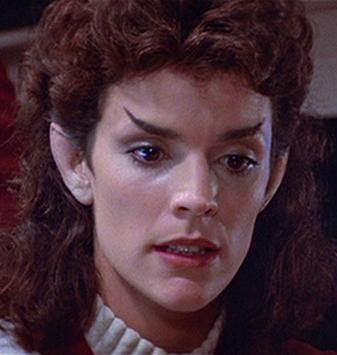 Along with the change in actresses we now note a major change in Saavik's personality, too: whereas all through TWoK we see that there is a lot of emotion brimming under Saavik's surface, in TSfS she is almost entirely all-Vulcan, all the time. Except for one or two scenes, she seems like a female Spock. The only time Saavik 2.0 comes close to showing actual emotion is when she reports to Admiral Kirk that David Marcus has been killed, and at the very end of the film, where she finds herself unable to hold Spock's gaze (because the film has implied, not terribly strongly, that she had Vulcan sex with Spock while on the Genesis planet). Saavik 2.0 is a pale reflection of Saavik 1.0, an awful disappointment; the character has gone from being one of the most interesting new additions to Trek to being someone who is merely along for the ride.

Robin Curtis's Saavik 2.0 would return in The Voyage Home, but very briefly. She is now no longer a part of the crew, and she only appears in a short scene at the beginning of the movie to tell Kirk something about David's death. The existence of the scene kind of strains credulity a bit; they've all been on Vulcan for three months, and right now is the first time Saavik's found the opportunity to tell him that David died bravely? Meh. Then we see Saavik standing beside Amanda Grayson (Spock's mother) as the Enterprise crew lifts off in their captured Klingon Bird of Prey. And that is the last time we ever saw Lieutenant Saavik.

(Yes, Saavik would show up in various Trek novels and comics, but those honestly don't count, as much as I loved some of the novels that I read and the DC Comics incarnation of Trek.)

So what happened? Why did a potentially interesting character vanish? Well, there were attempts to bring Saavik back, over the years. The character of Valeris in The Undiscovered Country, the traitor Vulcan, was originally intended to be Saavik; I'm glad they didn't go that route, personally. Also, Saavik was intended to show up in a nonspeaking cameo in an episode of The Next Generation, but apparently Kirstie Alley wanted too much money so that idea was shot. (One wonders why Robin Curtis wasn't even asked -- but the answer is, of course, that no one would have recognized her. By the time of TNG, Alley was one of the better known actresses in the US, thanks to Cheers.)

The general perception is, almost without exception, that Saavik 1.0 (Alley) was better than Saavik 2.0 (Curtis). I've never yet met a Trekker who liked Saavik 2.0 more. Many tend to fall into the usual trap of blaming the actress, but as usual with such things, I'm not sure that's fair. Curtis didn't write the character as basically someone for David Marcus to talk to in TSfS, nor did she make the odd decision to ignore the fact that Saavik 1.0 had arched eyebrows while Saavik 2.0 had pointed Vulcan ones. I read an interview once with Robin Curtis in Starlog in which she described how hard it was playing a Vulcan correctly, especially with the guy who pretty much invented Vulcan acting directing her on that film. She recalled Leonard Nimoy constantly telling her to make her line delivery dryer, dryer, dryer. Well, she's definitely dry in TSfS.

It's an odd thing, but it's clear to me that Saavik 2.0 is a writing mistake, and not a performance one. (For the most part, anyway. No one would seriously claim that Robin Curtis had as much charisma onscreen as Kirstie Alley.) I don't really think that the Trek producers had any real idea of where they were going with Saavik, as they wrote the "trilogy" of Treks II, III and IV. Each film had different writers, for one thing, but I would have hoped that producer Harve Bennett would have steered things a little more, as far as Saavik was concerned. An amazingly interesting character is introduced, and then completely retooled, and then just dropped aside without fanfare. That's a sad thing.

However, we should also remember what Trek was like back then. TWoK was made on the basis of TMP's box office success, but it was budgeted much lower. Ongoing Trek movies were by no means a sure thing, and new teevee series like TNG weren't even in the talking stage at that point. It's pretty clear that Saavik was bungled a bit, but it's not as if there was much opportunity to plan for Saavik in the future of Trek. TWoK was not made with TSfS in mind, and neither was TSfS made with TVH in mind. Trek was being done on a project-by-project basis, which explains, as least in part, how the promising Lieutenant Saavik was allowed to fall through the cracks.

And now I'm thinking, if this alternate-timeline Trek reboot does well, maybe Saavik will come in for better treatment when she comes along...in about twenty years.
scrawled here by Kelly Sedinger at 7:52 PM

Email ThisBlogThis!Share to TwitterShare to FacebookShare to Pinterest
Labels: Skiffy

I think Saavik fell victim to the same problem that existed with David and Carol Marcus; they were all interesting characters that deepened the Trek universe (and especially the character of Kirk) but there simply wasn't room for them in the established Trek formula. There were already seven original seven cast members jockeying for screen time, and now there were these three additional characters to deal with, too, and the writers of TSFS obviously didn't want (or weren't allowed) to deal with them. So Carol vanishes without on-screen explanation, David is killed off in a lame and pathetic way, and Saavik just... fades away. Very regrettable when you consider the possibilities those three could've brought to the ongoing story, but then the early '80s was a very different time for Star Trek, as you've noted.

As for why Saavik's characterization is different in TSFS than in TWOK, I'd lay the lion's share of the blame for that on the change in director from Nic Meyer to Leonard Nimoy. Nimoy apparently didn't get the memo on the half-Romulan backstory...