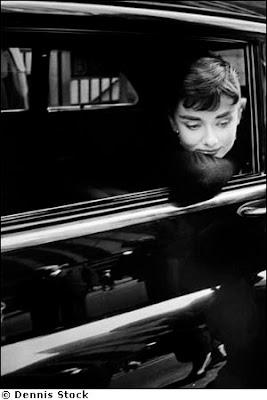 You would think that I, having nursed a terrible crush on Audrey Hepburn for years and having admired Humphrey Bogart for even longer, would have seen the original Sabrina by now. And, until a few weeks ago, you would have been wrong. But now you'd be right, because I finally watched the movie a while back. Take that, Big Hole in my Movie Watching Resume!

Anyhow, I did see the remake of Sabrina when it came out years ago, the one with Harrison Ford as Linus, Julia Ormond as Sabrina, and Greg Kinnear as David. The basic story was not altered much at all for the remake, as I remember it: Sabrina (Ms. Hepburn) is a young girl, on the cusp of womanhood, who is about to leave for schooling overseas. Her father is the chauffeur for the Larrabee family, and she harbors an enormous crush on David (William Holden), the young playboy whose dalliances are constantly being covered for by his stiff, business-driven, older brother Linus (Humphrey Bogart). When she returns from Paris, Sabrina has blossomed into a gorgeous young woman indeed, so much so that she finally does catch David's eye – but by this time, David has become engaged to the daughter of another very rich family with whom the Larrabee company desperately wants to do business, so his attraction to Sabrina is less than convenient. So Linus takes it upon himself to woo Sabrina himself, just to divert her attention until the deal can be completed.

Of course, anybody who's ever seen a romantic comedy knows what's going to happen next: Linus really does fall for Sabrina, and she really does fall for him, and it seems that all might end well when Sabrina naturally learns that Linus's courtship was originally a ruse of sorts. It's all very typical romantic comedy stuff, although I suppose this kind of thing was much fresher in the 1950s when the original Sabrina was made.

Nonetheless, the movie is totally charming. I haven't seen William Holden in much else, but his portrayal here of a spoiled, carefree rich playboy is spot on; he smiles and laughs his way through the movie. His character is less important, naturally, than Hepburn's and Bogart's. Fortunately, the movie has Audrey Hepburn and Humphrey Bogart.

Bogart is a bit older here than he was in Casablanca, and at first he seems an unlikely romantic lead in Sabrina - but that's exactly the point. He's playing a man who has no use at all for romance being forced by circumstance to behave as though he does, and Bogart conveys this so effortlessly that I was tempted to think that this was the real Bogart...but he was an actor, so it probably wasn't. He's not an older version of Rick Blaine; Linus Larrabee is someone totally different. Although Linus, like Rick, is alone by choice, he's not really alone out of cynicism but because his world simply doesn't allow for anything but loneliness. However, there are flashes that buried beneath the surface of this boring businessman is a man with some passions, and as the film progresses, Sabrina manages to awaken those passions before Linus even realizes that it's happening.

Sabrina is also, at times, wickedly funny, weaving moments of farce into the story effortlessly. This movie manages to convince us that, sure, a guy could totally forget that he'd stuck a pair of champagne flutes into his back pocket and thus sit on them, getting pieces of glass embedded in his backside.

In terms of specific comparisons between the original Sabrina and the Harrison Ford remake, all I can really remember is the very last scene of each. In the remake, Ford's Linus goes to Paris to find Sabrina, and then he has a speech of some sort in which he declares his love ("Save me, Sabrina-fair; you're the only one who can."). It wasn't a particularly effective moment, in all honesty. Much more effective is the way the original ends: with Sabrina sitting down on the deck of the ship that's taking her to Paris, and Linus coming around the corner, walking jauntily as he approaches her. They hug, and then "The End", with not a single word said. Why it is that remakes so often feel the need to have their characters say things that the people in the original didn't have to say at all has always been beyond me.
scrawled here by Kelly Sedinger at 8:26 PM

What I always remember as the end from the original is the porter on the ship bringing Linus's hat to Sabrina for her to fix the brim. I know there's a little bit more to the movie than that, but the look on Audrey Hepburn's face in that scene, going from confused to realization, is just priceless. I adore the original film and I thought the remake was just so-so.

You ask: Why it is that remakes so often feel the need to have their characters say things that the people in the original didn't have to say at all has always been beyond me.I have three theories:

One is that the makers of the remake don't have confidence in the material and think they have to spell everything out to make it "better."

A somewhat related second theory: the makers of the remake don't have confidence in themselves and their own abilities to tell the story as well as it was done before.

And the most likely: the makers of the remake don't have confidence that the audience is smart enough to get it unless it's spoon-fed to them. They didn't seem to have that attitude back in the beforetimes.