Do they carve "Yusef was here" before they catch the bus for Fort Hancock, Texas?

Steve Benen has some pretty breathtaking quotes from Senator Kit Bond, who is joining his fellow Republicans in hyperventilating over the closing of the detainee camp at Guantanamo Bay. I found these two quotes the most amusing:

"Americans also have a right to know if President Obama plans to send any of these terrorists to their communities."

"Whether these terrorists are coming to a prison in Kansas, or a halfway house in Missouri, or any other state -- I can tell you this: Americans don't want these terrorists in their neighborhoods."

Yeah. That's a good thing to be concerned about, because clearly President Obama's plans for the detainees at Guantanamo will end up looking like this: 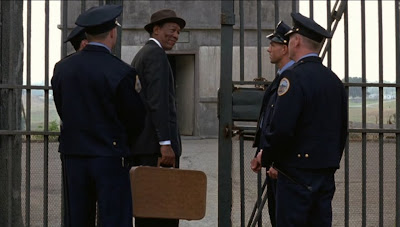 I expect that soon after Gitmo closes down, there will be a run on shipments of rock hammers to prisons throughout the US, and then in about twenty years, all of these guys will escape through the tunnels they dig in their own walls. Hopefully by then I will have moved, since I live about forty-five minutes away from Attica, NY. There are some pretty grim people housed there, as I recall.
scrawled here by Kelly Sedinger at 9:28 PM