:: In the "Weird as Totally Cool" Department: Lynn linked this bit about the largest model railroad layout in the world, which is located in Hamburg, Germany. There's a video there, but you can actually see a better copy of that video at the official site for the Miniatur Wunderland. Amazing!

Here's a detail shot from one cityscape of this amazing-looking railroad: 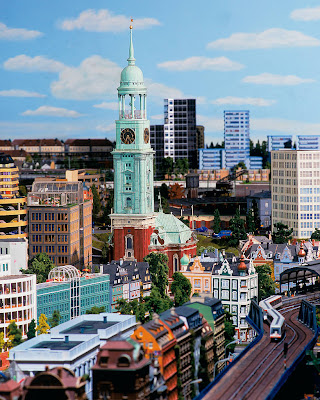 That's some great modelmaking, there.

:: I dropped by BrightWeavings.net to see if there's any news on the GGK front, and on the message boards, I found, amidst a discussion on literary snobbery, a link to someone's LiveJournal wherein they reproduced a book with some truly staggeringly bad descriptive writing. Go look. It's hilarious.

:: You never catch the fundraising pitch folks on Buffalo's PBS station, WNED, rising to this level in order to part you from your money:

Now there's a good sport! I hope the pledges came through for her; she should have had something to show for wearing Groucho glasses on the air and then getting hit with a pie.

:: I feel the need to revisit the Burst of Weirdness from three weeks ago, in which I questioned the need for a new version of Dora the Explorer that was described as "sexy". Since then, I've seen the actual new Dora who is coming down the pike, and here she is: 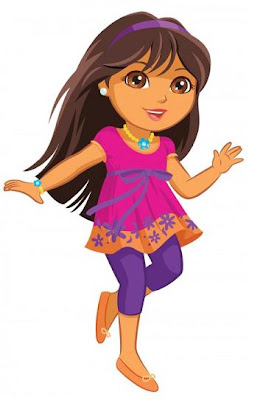 Well, that's not very offensive at all, is it? That's about how The Daughter, who is in the "tween" age group, dresses, and so do many of her friends. Plus, it turns out that Tween Dora isn't replacing Preschool Dora at all, but co-existing alongside. I'm not sure who encouraged the use of the word "sexy" to describe Tween Dora, but she's not sexy at all. She's a kid. Nothing to look at here, folks!

(Until, that is, Mattel decides to release Grown-up Dora....)

:: Speaking of Grown-up Dora, I thought I'd linked this a while back, and maybe I did, but a while back I saw a collection of grown-up renditions of Calvin and Hobbes somewhere, and this one really stuck in my mind: 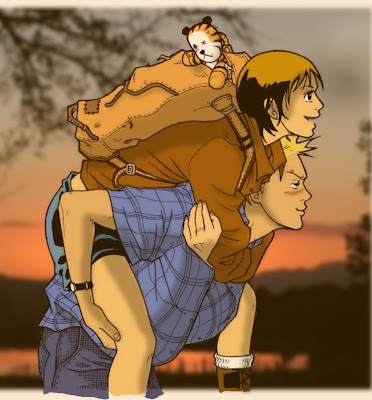 To my way of thinking, that's just perfect: older-Calvin still exploring those woods of his, but this time with Susie Derkins with him, an equal partner in all the exploration of that magical world we last saw C&H sledding off into. And Hobbes is along for the ride, even if in spirit only.

I grabbed this one from here; DeviantArt hosts a lot of other C&H fan renditions in an archive that's worth searching through.
scrawled here by Kelly Sedinger at 6:11 AM

The Dora "controversy" came about because the tease for her introduction was all in silhouette and you couldn't - of course - tell that she was wearing leggings. at some level, I think the promo was DESIGNED to raise controversy, then, when the reveal actually came, turn out to be innocuous.

However, aren't there some serious time-paradox-issues (you know better than I, being more of an SF fan) about having "tween Dora" existing at the same time as "child Dora"?

I'd find it confusing if I were a child, and probably reject the whole Concept of Dora as a result.