"I like to think you killed a man. It's the romantic in me." 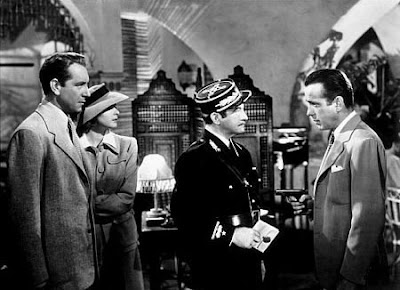 A while back, I watched Casablanca for the first time in several years. Why did I allow so long a time to elapse between viewings of this, a movie that's been in my personal Top Ten ever since I first saw it? Who knows, really...time was when I wouldn't go much more than a month without watching it, and in my sophomore year of college, I went through a six or seven week period when I watched it every single Sunday, after the early football game. Why so long this time? I genuinely can't say. Hopefully I won't wait until 2011 to watch it again.

A few random thoughts on the movie that occurred to me whilst viewing it:

:: Sam's role isn't as big as it seems. He's all over the first half of the movie, but we only see him once or twice after the Paris flashback.

:: The actors are helped by a screenplay that's full of some of the best dialog ever written, but they come to the aid of the script a couple of times. It takes great acting and directing to make a line like "Is that cannonfire, or my heart pounding?" come off as anything other than pure sap.

:: If there has ever been a better long closeup than Ingrid Bergman's when she first listens to Sam singing "As Time Goes By", I haven't seen it. It's an amazing closeup, that lasts for what feels like more than thirty seconds, and in that span, Bergman is able to convey a whole bunch of emotions, without changing her facial expression much at all: she shows resignation at being confronted with her past, fear that she's going to have to face Rick again, rueful remembrance for the last days she was truly happy, regret for the way she had to hurt the great love of her life, all with no words and just a camera focused tight on her features as she listens to a song.

:: Something hit me about the movie's timing – the timing of the story, that is. When does it take place? Well, Rick pegs it pretty specifically when he's getting drunk by himself; he says, "It's December 1941 in Casablanca. What are they doing in America? I'll bet they're asleep." December 1941. But the rest of the movie seems to imply that the story is taking place before America enters the war, doesn't it? Nothing is ever said specifically, but if a state of war existed between Germany and the United States, as it would beginning on December 8 of that year, surely Major Strasser's attitude toward Rick and "blundering Americans" would be different than what he shows. If Germany and America were at war, Strasser would probably treat Rick Blaine as an enemy rather than as a potential annoyance.

That being the case, the question that comes up for me is this: What does Victor Laszlo plan to do once he gets to America, anyway? There's no resistance effort to lead in America, so is he planning to try to raise money? Lick his wounds for a bit and rally some support before returning to Europe? Work for the Americans? I wonder, especially since, in light of what seems to be the fact that the movie takes place in the first week of December 1941, within a day or two of Victor and Ilsa's arrival in America, that country will be entering the war.

(No, I don't want the movie to have answered these questions, nor am I suggesting that the movie's "failure" to answer them is a "failure" at all.)

:: It interests me that Rick's Cafe has significantly higher ceilings than just about every other interior in the movie.

:: More love for Ingrid Bergman and Humphrey Bogart: there are times when they make hand gestures while talking in a very real way, the way people actually would while talking, even though the gestures in a couple of cases cause their lines to come out a bit muffled. (Not that you can't understand them, though.) Bogart's got an example when he meets Louis in his office after Victor's arrest; he rubs his cheeks and mouth while saying something. And earlier, when Ilsa is with Rick in his room above the Cafe Americain, she runs her hands through her hair in that way that some women do when they're talking about heavy stuff after having been awake for a long time. Tiny things, those, but it's those tiny things that add up to convincing portrayals.

:: I never noticed before how much Ugarte is sweating in his scene with Rick early in the film. Rick's not sweating at all, but Ugarte's face glistens all over with sweat. I wonder if that was intentional, depicting Ugarte's tension at trying to get away with murder, or if Peter Lorre was just a lot hotter than Bogart on the set.

:: I can't remember where I saw it, but I read within the last year somewhere a suggestion that Louis is gay. Sorry, but I'm just not seeing it.

:: On some level I'm willing to grant the point to people who know more than I do, but I'm sorry, experts: I still hear Peter Lorre as saying "De Gaulle" instead of "Weygand".

Well, that's all for now. I'll return to Casablanca sometime sooner than a few years, though.
scrawled here by Kelly Sedinger at 6:32 AM

Ah, my very favorite movie next to the original Star Wars; I find it endlessly enjoyable.

Re: the temporal setting of the movie and Laszlo's reason for going to America, I've always assumed (like you) that the story takes place in the week before Pearl Harbor and that Laszlo intends to somehow persuade FDR to enter the war or at least increase the flow of aid to Britain and the various resistance groups. Since the Pearl Harbor attack and America's entrance into the war will likely happen before he and Ilsa can reach U.S. shores (given the slowness of transportation at that time), his mission is rendered null and void, and Rick and Ilsa's sacrifice is all the more noble because it was essentially for nothing.

As for Louis being gay, no way. Not that there's anything wrong with it, as Seinfeld would say, but it bugs me that we're now supposed to read any close relationship between men as homosexual. Rick and Louis, and Rick and Sam as well, are friends who share a deep affection for one another but without any kind of sexual element that I can see.

Man, I haven't watched it since I got married, and that'll be a decade next month. Must rectify.

Funny. I always wondered if perhaps both Louis and Rick were gay. Especially after the last minute of the film when they discuss going to some spa in the desert together and we hear the famous words, "Louis, I think this is the start of a beautiful friendship."