Continuing my answers to questions posed in this year's edition of Ask Me Anything!, we have a set of queries from Mark.

1. Do you suppose that Trekkies will be further degraded or taken more seriously from now on because of this incident?

The incident in question is a robbery that took place in Colorado Springs, where someone held up a convenience store using a bat'leth as their weapon. And what, non-Trek fans, is a "bat'leth"? It's a Klingon double-bladed sword, like this: 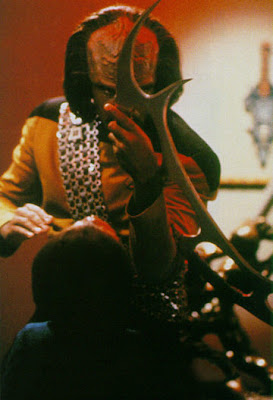 Well, I suppose Trekkies (or Trekkers) can never really make up ground, even as comic book fare becomes more and more mainstream. But this will certainly help the bat'leth to be taken more seriously, won't it! I wouldn't mess with someone toting one of those around. Unless I had a phaser on me. Or a lightsaber. (Sorry to mix my franchises.)

2. Should the NFL expand to 40 teams in our lifetime? Will it?

It shouldn't, and I greatly doubt that it will, unless it starts going "International", and even then, some logistical problems would be created. If there were teams in Europe, those teams would probably have structural advantages owing to constantly facing teams with jet lag, right? And I'm just not sure there are enough cities in the US or even Canada who are willing to stomach the costs that come with the operation of an NFL team. Maybe I'm wrong, but I'm thinking – or maybe hoping - that the current economic disaster will forever crush the ability of NFL teams and their owners to basically strong-arm municipalities into building and maintaining stadiums. I think the whole thing has just become completely insane: erecting billion-dollar palaces for sporting events that take place about a dozen times a year? The whole thing is just ludicrous.

The other argument against continual NFL expansion is that the talent pool for the teams would continue to become shallower and shallower. There are currently 32 teams in the NFL; the addition of another eight teams would add 424 players to the league, just on the active rosters. Are there really 424 players currently in the college ranks who are of NFL calibre? I doubt this.

I think the NFL is, frankly, big enough.

3. Have you listened to the Storied Northwest on iTunes yet?

No. I don't even have iTunes. But I'll look into them, in some way!

We'll do more answers...sometime soon!
scrawled here by Kelly Sedinger at 10:33 AM

Email ThisBlogThis!Share to TwitterShare to FacebookShare to Pinterest
Labels: Ask Me Anything 2009

I have to admit, it's not a bad weapon choice. Although, it kind of sounds like a bad episode of "The Big Bang Theory"

Here's a question. are you going to buy 'American Idol' trading cards: http://timesunion.com/AspStories/story.asp?storyID=780775

And should Dunkleman be included?