But not quite as much this week, and I was busy for most of today, so just a couple of strange things, one of which wasn't even something I saw online, but...ach, let's just get on with it:

:: Some guy on CNN had a guest on, discussing politics and whatnot, and the CNN guy asked his guest if President Obama was "trying to brazenly deceive the American people". Who was the guest of whom this question was asked? Dick Cheney. Well, he oughta know, huh? I mean, if you want to talk about someone brazenly deceiving the American people, you can't do much worse than Bush's VP....

:: One reason I didn't post much today was that I was catching up on my episodes of 24, since I was three behind and didn't want to fall four behind after tomorrow night's ep. At the beginning of the last of the three episodes I had to watch, the obligatory guest star listing was scrolling by as the show began, and one name caught my eye. It looks like Jack Bauer might be joined by the other great anti-terrorist crusader of our time! Woo-hoo! 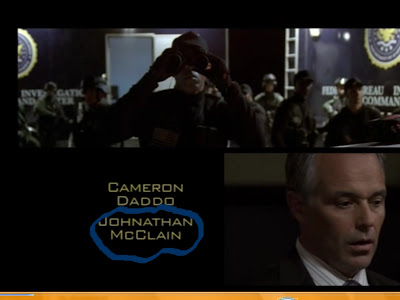 Can't you see those two working together? "Yippee-ki-yay, motherf--" "We're running out of time!!!"

That's about it. More next week. Unidentified Earth will return next week as well.
scrawled here by Kelly Sedinger at 10:59 PM