Stupid Thoughts that Randomly Popped Into My Head 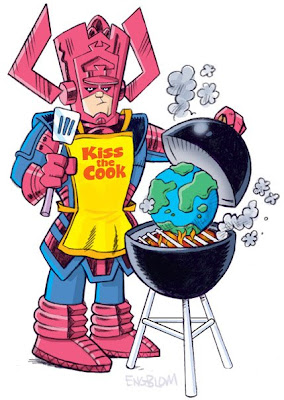 OK, so for some reason, I was thinking about Galactus. He's the Marvel Comics supervillain who basically flies around the Universe eating planets, because that's what he eats: planets. So I was thinking, does he get in the mood for certain kinds of planets? I mean, is Galactus ever kicking back and thinking, "Hmmm, I could go for a nice frozen rock of a planet right now, kind of like that one they call 'Pluto' in that one system I'm not supposed to eat?"

Are there any planets that Galactus avoids unless he's utterly ravenous, because he either hates the taste or because they disagree with him? Does Galactus fly through our system, look at Mars, and think, "Tastes good, but I'd better not. Last time I ate a planet with that much red dust, I had heartburn for a thousand years."

Does Galactus ever throw up? What does that look like? Could our Solar System's asteroid field have resulted from Galactus doing his Galactic equivalent of praising the porcelain god?

Would Galactus's Thanksgiving dinner consist of eating Jupiter, Saturn, Uranus and Neptune in one shot? Would he take a nap afterward?

Would a planet like Venus, by virtue of all that CO2 in the atmosphere and all the sulfuric acid and other nasty chemicals all over that world, leave Galactus with a really nasty aftertaste in his mouth? Would it give him a bad case of space flatulence?

When Galactus is just kicking back and wants to nosh on some snack food, does he snack on moons and comets and stuff like that? Is an Oort Cloud his version of a big bag of Cheetos?

And does Galactus ever get to wash it all down with anything at all? Or could his constant angry look just be the fact that he has eternal cottonmouth because he can't ever get a nice drink to clean out his palate?

If Galactus eats a planet that hasn't completely solidified yet because its accretion disc isn't quite done accreting yet, is that his equivalent of eating something that's only half-baked? Does he spit it out when he realizes it isn't done yet? Does he shove it closer to its sun to help it cook a bit more, like throwing a steak back on the grill?

Yeah. I desperately need to get out more.

(Above image stolen from here.)
scrawled here by Kelly Sedinger at 11:06 AM

Email ThisBlogThis!Share to TwitterShare to FacebookShare to Pinterest
Labels: Comics