:: Via FanDumb, I see that Vladimir Putin recently toured a new intelligence headquarters in Moscow. Nothing weird about that, really, except for the insignia inlaid on the floor of the lobby: 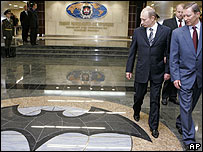 If anyone can tell me why the Hell the Russians have put a big Batman logo on the floor of their new intelligence HQ building, please do. I'm all ears. I wonder if the passwords to enter various areas in the HQ are quotes from the old Adam West Batman teevee show?

:: PZ Myers points out a bit of modelcraft that mixes geek culture with a love of candy. An intrepid individual has constructed a model of Helm's Deep from The Lord of the Rings: The Two Towers out of candy.

Interesting stuff. (Of course, I'm one who isn't sure why we need a new format already in the first place. Don't people like to own things for more than a handful of years anymore before having to replace it?)