Did they execute Order 66? 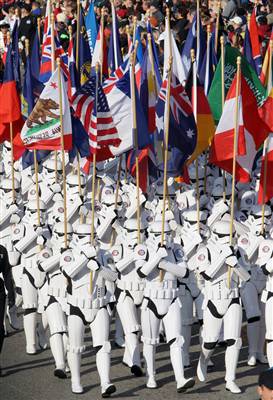 Most years, we spend New Year's Morning watching the Rose Parade. Today, though, we left the teevee off and cooked a nice pancake breakfast for ourselves.

Then I find out that George Lucas was the Grand Marshall, and that the parade had a Star Wars theme.

So I missed it. Arrrgghhhh!!!

More photos here. And a MeFi thread with some mild geek-bashing, and a typical attack on Lucas himself:

Yeah, because Lucas is the only filmmaker doing anything like that!

Here's a video of the Star Wars section of the Rose Parade on youtube: