Why can't cars just be fueled by hot air?

This afternoon I got annoyed while trying to buy gas, and slipped out with a string of salty words. With The Daughter in the back seat. I hate when I do that, and I'm trying to break that habit immediately. (I apologized to her seconds later.) I was angry that I'd been cut off in the line for the pumps (not huge lines, just two or three cars deep), and I ended up going somewhere else. But as I drove away, I thought about what had happened, and I realized that it wasn't at all the fault of the motorist who'd pissed me off. It was the gas station's fault.

Here, via Google Maps, is the gas station in question: 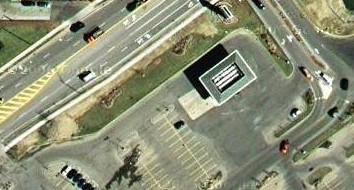 Beneath that canopy are four sets of pumps, for eight pumps total, so you have room for four cars gassing up to either side of the cashier's booth, which is in the middle of the whole operation. I guess we're all familiar with the basic concept of the gas station, right? Pumps that dispense from the right and others that dispense from the left, to be used by motorists depending on what side of the car their gas port is on? OK.

The problem here is that this gas station is surrounded by parking lot, which means that there is no set way for cars to approach the pumps. Assuming the top is "north" (actually, it's more northwest, but we'll call it north to save time), cars pulling in via the driveway just to the east there should come about and approach the station from the south, and thus queue up depending on what side of the car they fuel on. But at this station, alone of every gas station I ever use in this area with any frequency, nobody does that.

Today, I pulled in to get gas. My car fuels from the passenger side, so I took stock of the situation. You'd think that I would come down that driveway, swing around to face north, and then pull into an appropriate pump -- in my diagram, one of the odd-numbered pumps -- to either side of the cashier booth, still facing north.

Alas, this was impossible. I'm sitting south of this whole mess, down below pumps 5, 6, 7, and 8. The car at pump 3 is facing north, fueling from his passenger side. OK. But the car at pump 7 is facing south -- i.e., facing me -- fueling from his driver side. So I can't really pull up to pump 7 as if lining up, because to do so will block that motorist's exit. And at pumps 1 and 5, both cars are facing south, fueling from their driver sides. At pumps 4 and 8, the cars there are actually facing each other -- pump 8 is facing north, pump 4 is facing south -- so again I can't just queue up there in the wrong direction either. Pump 6 was actually vacant, but someone at pump 2 was facing south, so even if I'd back into pump 6 to fuel from my passenger side, I'd be blocking that guy when he tried to exit.

And it's at this point that someone else comes in behind me, swings around, and queues up behind the south-facing guy at pump 1 -- which would mean that if I backed into pump 6, the guy at pump 2 wouldn't be able to move until either I or the new guy lining up in the wrong way moved forward.

Adding to all this confusion is that the driveway isn't even the only way to enter the gas station area -- it's situated in an outlying parcel of a large strip plaza, so cars are always coming not just from that driveway but from the other three or four possible directions as well. At non-busy periods, this usually isn't a problem, but on busy days it's quite the bungle of traffic as people basically take the "Look out for number one" approach to getting to these particular pumps.

It doesn't have to be this way, obviously. Here's the other gas station I tend to frequent regularly: 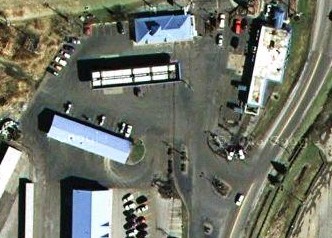 Here, the pumps are under that long canopy directly south of that blue-roofed building at top. (That's the convenience store, and that long building running north-south over to the right is a carwash.) Here, cars enter the operation from the south, and as can be seen, there just isn't room for them to swing about the north and come at the pumps from the opposite side. Here, everybody queues up to enter the pumps from the same side, exits from the same side, and everybody's happy. (In a particularly ingenious stroke, this station recently made their turnover at the pumps even quicker by installing this super-long hoses that will reach either side of your car no matter which pump you use, meaning that unless you're driving a Hummer with a pumped-up chassis, you can run the hose to the opposite side of your car if you have to.)

This isn't difficult stuff here, folks. The main idea behind channeling large amounts of people through a limited service space is pretty simple: clearly mark where they're supposed to go, and in what direction, and you won't have big problems. The fact that the gas station that frustrated me today (as it often does) is operated by one of Buffalo's main grocery store chains (not mine, though!) makes their half-assed operation all the more baffling. These folks know better.

When my husband was working his way through college he had a job at a gas station. They had a common practice of parking an empty car at one of the pumps and just leaving it there any time business got slow. Oddly, if there was no one there it seemed others were less likely to stop in. But as soon as there was "SOMEONE" parked at one of their pumps, others began to follow suit rather quickly.

Are we really all just a bunch of lemmings?

I remember the insanely long lines at fuel stations during the gas shortage of the 70s. Now THAT was ugly.

I like the extra long hose idea. Depending on if I'm driving my vehicle or my husbands I need to fuel up on different sides and sometimes out of habit I pull in the wrong way, so this would help!

However, here in Oregon there is a STATE LAW that we are not allowed to pump our own gas, which totally baffles me. Seriously. There is no self serve. ALL the gas stations have attendants and they will get down right cranky with the out-of-staters who start to get out of their cars to fuel up themselves out of ignorance of this partiuclar statute.

They say it is a safety/environmental issue to avoid gas spills. I think they are just trying to create more jobs.

New Jersey has the same type of law. Attendants must pump the gas. I found this out whil travelling this year. The client I was with told me that she believed that New Jersey was the only state to do this, in an effort to provide some extra jobs to the economy. Interesting to know that there are more states that do this.
Here in Minnesota, we actually have to bag our own groceries too. I once heard that this is one of the only areas to do this. Anybody else out there have to bag their own groceries?

You have to bag your own groceries? Huh?!

It depends where you shop. We have been buying our groceries from Lund's for the past five years. It's not even the bagging that I care about. We easily shave a half hour off the time spent in the store over shopping at Cub or Rainbow, the deli meat is far superior, and the overall experience is far less stressful. Easily worth the extra $5 a week average it costs over Cub.

The closest higher-end grocery store that is near me is a Kowalski's and I've never set foot it. The Byerly's about 6 miles away has baggers, like their sister store Lund's, but I am not enamored enough to go well out of my way to go there.
Isn't it ironic, Jaq, that my high school and college job was bagging groceries and now I, along with most Twin Citians, have to bag them myself?
This was one of the things that was eliminated in the protection of profit margin for the "discount grocers". One less set of employees to hire and pay.